Robert F. Kennedy and the 1968 Indiana Primary, to be released by Indiana University Press in April 2004 and written by Ray E. Boomhower, marks an important anniversary in the political and social history of Indiana and the nation.

On April 4, 1968, Robert F. Kennedy, U.S. senator from New York, appeared in Muncie, Indiana, as part of his campaign for the Indiana Democratic presidential primary to be voted on in May. In the primary, he faced opposition from Indiana governor Roger Branigin and fellow U.S. Senator Eugene McCarthy, who had shocked President Lyndon Johnson by capturing more than 40 percent of the vote in the New Hampshire primary.

As Kennedy prepared to leave Muncie for a short flight to Indianapolis to appear at another rally, he learned that African American civil rights leader Martin Luther King Jr. had been shot outside his hotel in Memphis, Tennessee. Before his plane landed in Indianapolis, Kennedy heard news that King had died.

Despite warnings from Indianapolis police that they could not guarantee his safety, and brushing off concerns from his own staff, Kennedy decided to proceed with plans to address an outdoor rally to be held in the heart of the city’s African American community at the Broadway Christian Center’s outdoor basketball court on Seventeenth and Broadway streets. 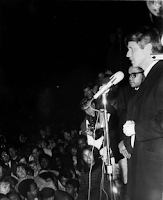 On that cold and windy evening, he broke the news of King’s death to a crowd that had been anticipating a typically raucous political event. Before the now stunned and disbelieving audience of black and white voters, he gave an impassioned, extemporaneous six-minute speech on the need for compassion in the face of violence that has gone down as one of the great speeches in American political history. To help explain the terrible tragedy, Kennedy called upon the words of Aeschylus, the Greek tragedian who had comforted him following the assassination of President John F. Kennedy. Robert Kennedy told the crowd: “My favorite poet was Aeschylus. He once wrote: ‘Even in our sleep, pain which cannot forget falls drop by drop upon the heart, until, in our own despair, against our will, comes wisdom through the awful grace of God.’”

The news of King’s death had sparked outrage and violence across the country. Riots had broken out in more than a hundred cities and approximately 75,000 National Guard and federal troops were called out to maintain some semblance of order. Thanks, in no small part to Kennedy’s calming words, the streets of Indianapolis remained quiet; there were no riots in the Circle City.

Robert F. Kennnedy and the 1968 Indiana Primary marks the 40th anniversary of Kennedy’s Indianapolis speech, explains what brought him to Indiana that day, and explores the characters and events of the 1968 Indiana Democratic presidential primary. The eyes of the nation had turned to the Hoosier State in the spring of 1968 as Kennedy decided to run for president against incumbent and fellow Democrat Lyndon B. Johnson and had selected the nineteenth state’s presidential primary as the first test for his campaign.

In addition to Kennedy’s masterful speech, the Indiana presidential primary brought together some fascinating Hoosier political figures. Branigin, the state’s popular governor, had initially agreed to run as a stand-in for President Johnson in the primary. With Johnson’s decision to withdraw from the race, Branigin decided to remain in the primary as a favorite-son candidate. The governor had the firm support of Eugene Pulliam, the powerful owner and publisher of the Indianapolis Star. Pulliam did whatever he could to aid Branigin during the primary.

Also, both the Kennedy and McCarthy campaigns had Hoosiers working as key advisers. Jeremy Larner, a McCarthy speechwriter, had grown up in Indiana. Kennedy himself relied heavily upon the advice of John Bartlow Martin, who had grown up in Indianapolis and worked for the Indianapolis Times. Martin, a freelance journalist who made his living writing for such popular magazines of the day as Look and Collier’s, had worked on a number of Democratic presidential efforts, including those of Adlai Stevenson and John F. Kennedy. Martin offered sage advice to Robert Kennedy on the best way to reach out to voters in Indiana.
Posted by Ray Boomhower at 10:30 AM No comments: