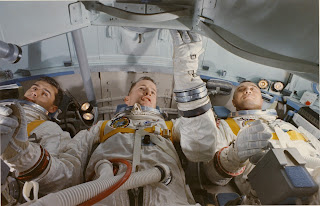 January 27, 2017, marks the fiftieth anniversary of one of the American space program's worst tragedies, the fire on board the Apollo 1 spacecraft.
On Friday, January 27, 1967, the National Aeronatuics and Space Administration was engaged in yet another step on the long journey to the moon by attempting a simulated countdown of the three-man Apollo spacecraft at the Kennedy Space Center's Pad 34.
At one o'clock in the afternoon astronauts Roger Chaffee, a rookie and the youngest person ever selected to join the astronaut corps; Ed White, the first American to walk in space; and Hoosier native Gus Grissom, the first American to fly in space twice; entered the Apollo command module, built by North American Aviation. They never made it out alive. At 6:31 p.m., flight controllers on the ground heard an astronaut, probably Chaffee, calmly announce: "Fire. I smell fire." Seconds later, White more urgently stated: "Fire in the cockpit."
According to NASA procedures, an emergency escape from the Apollo spacecraft took at a minimum 90 seconds. The crew, however, had never accomplished such a difficult feat in that time. To escape the troubled capsule, Grissom had to lower White's headrest so White could reach above and behind his left shoulder to use a ratchet-type device to release the first in a series of latches to open the hatch.
The astronauts performed their tasks bravely in spite of the inferno raging around them. White, with Grissom struggling to help him, actually made part of a full turn with the ratchet before being overcome by smoke. Chaffee, the rookie, had carried out his duties by turning up the cabin lights as an aid to vision and turning on the cabin's internal batteries for power. 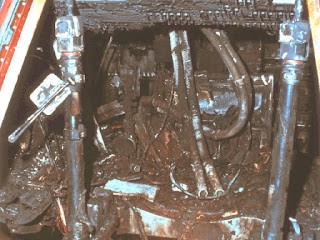 The intense heat and smoke hampered rescue efforts, but pad workers finally were able to open the hatch. They were too late; the three astronauts were dead, killed not by the fire, but the carbon monoxide that filled the cabin and entered their spacesuits after flames had burned through their air hoses. Doctors treated 27 men involved in the rescue attempt for smoke inhalation. Two were hospitalized.
It took NASA more than a year after the accident, during which time the spacecraft underwent extensive modification, to launch another manned mission. Apollo 7, commanded by Grissom’s friend Wally Schirra, an original Mercury astronaut, made 163 orbits during its eleven-day mission in the redesigned command module; America was back on its way to the moon.

There were a number of ironies associated with the Apollo 1 disaster, the most obvious being that three astronauts had been killed not on a hazardous trip into space, but on the ground during what was believed to be a relatively safe test involving an unfueled rocket.
Also, there were many in NASA who believed that the fire, great a tragedy as it was, might have been one of the best things that could have happened for the American space program. "I think we got too complacent in the manned program," one Apollo engineer said. "The fire really woke people up." And if there had not been a fire on the ground, there may have well been one in space. If that had happened, if a fire had occurred while Apollo was in orbit or on its way to the moon, the American space effort might have been set back for a decade or more.