Indiana’s Turkey Run State Park, located in Marshall, Parke County, has within its 2,382 acres some of the state’s finest scenery. Richard Lieber, noted environmentalist and the first director of the Indiana Department of Conservation, described the area as “a paradise of rocky gorges, glens, bathing beaches and waterfalls, a retreat for song birds, and a garden of wild flowers.” Each year thousands of visitors hike through the park’s thirteen miles of trails, marveling at such natural features as Rocky Hollow, Gypsy Gulch, Wedge Rock, Turkey Run Hollow, and Devil’s Ice Box. 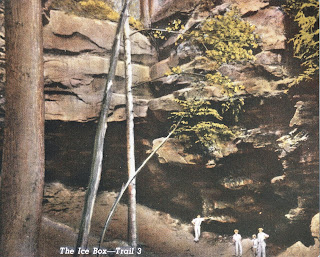 On May 18, 1916, however, most of the land that now makes up Turkey Run, also known as Bloomingdale Glens, seemed under threat. For years the land, which had been originally settled in 1826 by Captain Salmon Lusk and passed on to his son, John, had been open for Hoosiers to visit and enjoy. After John died in 1915, however, his heirs planned to auction off the land.

A parks committee of the Indiana Historical Commission (created by the state legislature to commemorate the nineteenth state’s centennial) made a valiant effort to buy the land and save it for future generations to enjoy, but the Hoosier Veneer Company of Indianapolis outbid the committee by the slim margin of $100, purchasing the property at auction for $30,200. The firm intended to cut down a vast number of magnificent beech, walnut, oak, sycamore, maple, and poplar trees that dotted the landscape.

On assignment covering the auction for the Indianapolis News that day was its ace reporter William Herschell. To Herschell, who had been one of more than 2,000 people that attended the auction, it seemed as though Turkey Run had “passed into the hands of those who, for the dollars of today, would wreck a State’s happiness tomorrow.”

Walking along a path skirting Sugar Creek, which meanders its way through the area, and reflecting on the day’s events, the reporter met by chance a member of the delegation brought by the parks committee to save the land from the woodsman’s ax—a local woman who had often played in Turkey Run’s woods as a child, whose own children had followed in her footsteps, and who had been among the first to call for the area to be conserved. “I am sick of soul,” the tear-stained woman told Herschell. “Who would have dreamed that a few men’s dollars could step in and destroy all this, the most beautiful spot in all Indiana, one that all the money in the world could not restore once it is gone.”

Herschell realized that the woman’s tears were not those of resignation at a lost cause, but “fighting tears, the kind that the bravest warrior sheds when he is going into battle.” The journalist’s assessment proved to be true; the fight to save Turkey Run from destruction was far from over. Six months after the initial auction, the parks committee—bolstered by financial contributions from the public and the owners of the Indianapolis Motor Speedway—finally reached a settlement with the Indianapolis timber company, which accepted a $40,200 offer for the site. Eventually, Turkey Run became Indiana’s second-ever state park (McCormick’s Creek in Owen County had earned the honor of being the first state park while negotiations over Turkey Run were still going on.) 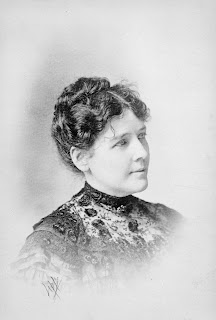 The tears that had so moved Herschell had come from Juliet Virginia Strauss, well-known to the citizens of her hometown, Rockville, Indiana, and to readers nationwide under her nom de plum, “The Country Contributor.” This homemaker who struggled so hard to save the forests of her youth wrote a steady stream of common-sense, down-to-earth observations on life for Indiana readers of her weekly “Country Contributor” column in the Indianapolis News and for the approximately one million Ladies’ Home Journal subscribers who read her column “The Ideas of a Plain Country Woman.”

During Strauss’s childhood in Rockville, her family, who had roots in the South, was excommunicated from the Presbyterian Church for supposedly being Confederate sympathizers during the Civil War. Following the death of her carpenter father, who had nicknamed the young Juliet “Gypsy” (later shortened to Gyp) because of her constant wanderings in Parke County’s lush forests, Strauss and her family had been looked down upon for their poverty by the upper ranks of Rockville society. Pretty, poor, talented, and fatherless girls, noted Strauss, always made a “fine target for village gossips and for the slings and arrows of outrageous fortune as dealt out by more fortunate girls who have fathers and big brothers and money and ‘social position.’”

Although no scholar, Juliet excelled in one area: writing. Discovering her talent, fellow classmates, especially boys, often used her skills to improve upon their writing assignments. Her teacher, familiar with Juliet’s style, soon discovered the ploy and marked entire paragraphs with a blue pencil with the word “Gyp” in parenthesis beside them. Her writing talent caught the eye of John H. Beadle, a roving correspondent for the Associated Press and editor of the Rockville Tribune. Beadle convinced her mother to let her daughter write for the newspaper and started the young woman on her newspaper career. 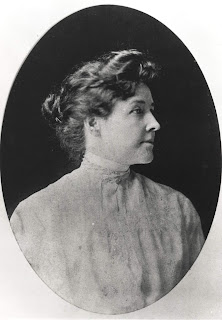 After a short stint teaching, she was married at a young age to a boy from the “wrong side of the tracks.” Juliet and her husband, Isaac, who struggled to earn a living as operators of the small-town weekly newspaper they bought from Beadle, were excluded from the literary and other social clubs that sprang up in the community in the 1900s. Although she claimed that these experiences failed to embitter her, Strauss emphasized in her writings the overwhelming importance of a woman finding her place at home, and the dignity and worth of such a life as opposed to the doings of fashionable and elegant society ladies. “Being a plain home woman,” she argued, “is one of the greatest successes in life, if to plainness you add kindness, tolerance, and interest, real interest in simple things.”

Strauss’s writing found—in addition to frequent hardships and struggles—joy, beauty, and art in a homemaker’s daily life. “I know what it is to be poor and to be held down seemingly to a level beneath my natural abilities,” Strauss wrote. “I know what it means to be tired of the dishrag and sick of the coal-scuttle, but I have learned . . . that there is a way of accepting these things which lift them to the level of the brush and the pen and the strings of the harp or the violin.” Her efforts to glorify homemaking struck a chord with her female readers across the country who grew, through long association, to consider the Rockville housewife “as friend and counselor,” the News commented upon Strauss’s death on May 22, 1918. 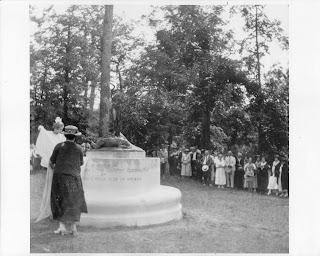 Her readers recognized Strauss as one of their own. Homemakers continually turned to her for the homespun advice and encouragement she offered and mourned her passing with poems and letters praising her work printed in newspapers throughout the state. In 1922 the Woman’s Press Club ofIndiana erected a more concrete tribute to Strauss, dedicating a statue titled Subjugation in her memory at Turkey Run. Sculpted by Myra R. Richards of Indianapolis, the monument, the Press Club claimed, captured the true spirit of Strauss’s writing—the subjugation of the material to the spiritual. The work also honored the Rockville native’s role in saving the lush forests of her youth from destruction.

Reflecting on her life after her children had grown up and moved away from home, Strauss expressed pride at never following anyone’s lead. “I lived my own life,” she proudly stated. “If I wished to ride a horse, or to play a game of cards, or to go wading in the creek with the children, I always did it. I never strained my eyesight or racked my nerves trying to arrive at small perfections. I avoided rivalries and emulations. In short, I lived.”