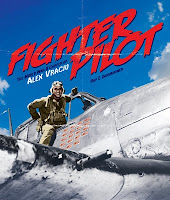 My book Fighter Pilot: The World War II Career of Alex Vraciu, published by the Indiana Historical Society Press, has been named as a finalist in the juvenile, nonfiction category of ForeWord Magazine's annual Book of the Year awards.

Winners will be determined by a panel of librarians and booksellers selected from ForeWord Magazine's readership. Gold, Silver, and Bronze winners, as well as Editor’s Choice Prizes for fiction and nonfiction will be announced at a special program at the American Library Association's Annual Conference in New Orleans this June. The winners of the two Editor's Choice Prizes will be awarded $1,500 each and ForeWord’s Independent Publisher of the Year will also be announced. The ceremony is open to all ALA attendees and exhibiting publishers.

ForeWord's Book of the Year Awards program was created to spotlight distinctive books from independent publishers. What sets the awards apart from others is that final selections are made by real judges--working librarians and booksellers--based on their experiences with patrons and customers.

The magazine's awards process brings readers, librarians, and booksellers together to select their top categories as well as choose the winning titles. Their decisions are based on editorial excellence, professional production, originality of the narrative, author credentials relative to the book, and the value the book adds to its genre.
Posted by Ray Boomhower at 9:31 AM No comments:

I will be at the Brookville Public Library, 919 Main Street, Brookville, Indiana, at 6 p.m. on Friday, March 18, to talk about my book Fighter Pilot: The World War II Career of Alex Vraciu, published by the Indiana Historical Society Press in 2010.

For more information about the program, contact the Brookville Library at (765)647-4031.
Posted by Ray Boomhower at 10:14 AM No comments: