Saturday, January 7, is the birthday of a Hoosier original, Juliet Strauss, who was born on that day in 1863 in Rockville, Indiana.

During her life, Strauss wrote for her hometown Rockville Tribune newspaper and produced a steady stream of common-sense, down-to-earth observations on life for Indiana readers of her weekly “Country Contributor” column in the Indianapolis News and, from 1905 until her death in 1918, for the approximately one million Ladies' Home Journal subscribers through her column “The Ideas of a Plain Country Woman.”

Strauss came to be considered as one of the most widely read female writers in America. Indiana historian Jacob Piatt Dunn, Jr., who noted that Strauss’s writing possessed the Hoosier characteristic of “optimism and wholesomeness,” claimed that the Rockville writer was “more widely read than any American essayist has ever been.” In the history of the world, Dunn went on to say of Strauss, “nobody ever wrote so much about the common things of everyday life, and held their readers.”

I first came across Strauss while doing research for an article on Indiana’s centennial celebration for Traces of Indiana and Midwestern History in 1991. Her life and work intrigued me and I subsequently wrote an article about her career for the spring 1995 issue of Traces, which examined Hoosier literature. Through the years, I have developed a genuine fondness for this Hoosier original whose column "The Ideas of a Plain Country Woman" in the Ladies’ Home Journal attracted readers from throughout the country. It was not only her work for the Journal, and her columns in both the Rockville Tribune and Indianapolis News, that drew me into investigating her life, but also her dedicated efforts at saving from destruction the scenic splendor that now is Turkey Run State Park. The result was my biography, The Country Contributor: The Life and Times of Juliet V. Strauss, published in 1998. 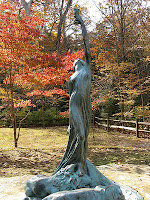 What writer could resist examining the life of a person who had so dedicated a following that the Woman’s Press Club of Indiana spearheaded an effort to erect a statue in Strauss’s honor at the park, which was sculpted by Myra R. Richards of Indianapolis. What was it about “The Country Contributor” that inspired this intriguing work, titled Subjugation? The impressive statue features a graceful figure of a woman with one arm outstretched holding aloft a slender goblet. Her other hand rests on the head of a peacock, which symbolizes pride. Crouched before the woman are a lion, representing brute force, and a tiger, signifying treachery. In the folds of the gown that fall from her figure are an ape, representing imitation in contrast to the genuine, and a wild boar, signifying gluttony. How many hikers have passed by this site and wondered how it came to be at Turkey Run?

There are, however, more complex reasons for a biographer to devote time and energy to their craft. I would be remiss if I failed to point out that I was drawn to Strauss in part because she captivated me with her frank comments about her life and career. In one example, she wrote George Cottman, Hoosier historian and Indiana Magazine of History founder, expressing her frustration early in her career over her failed attempts at convincing publishers to print her work. She confessed to Cottman that it made her “sick to see others who have scarcely a grain of talent printing their trash in respectable publications.” A bitter and self-serving statement perhaps, but it is also an honest one.
Posted by Ray Boomhower at 9:31 AM No comments: