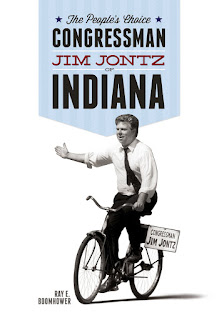 On the eve of Election Day in November 1974, a lonely figure trudged down the road in Monticello, Indiana. Jim Jontz, a young, first-time candidate for the Indiana House of Representatives, was finishing up a long day of campaigning. Offered a ride by a local Democratic Party volunteer at whose house he had been staying, Jontz answered: “No, it’s late, but there’s a laundromat up there that’s still open I think I’ll go hit before I quit for the night.”

The next day Jontz, a twenty-two-year-old Indiana University graduate with an unpaid job as a caretaker for a local nature preserve, defeated his heavily favored Republican opponent, John M. “Jack” Guy, Indiana House Majority Leader by a razor-thin two-vote margin. “One more vote than I needed to win!” he later exclaimed. The unexpected result stunned election officials, with one deputy clerk in Warren County marveling, “I never before realized just how important that one vote can be.”

Now available from the Indiana Historical Society Press, The People's Choice: Congressman Jim Jontz of Indiana, is the first-ever biography of Jontz and examines his remarkable long shot political career and lifetime involvement in local, state, and national environmental issues. As a liberal Democrat (he preferred the terms progressive or populist) usually running in conservative districts, Jontz had political pundits predicting his defeat in every election only to see him celebrating another victory with his happy supporters, always clad in a scruffy plaid jacket with a hood from high school that he wore for good luck. “I always hope for the best and fight for the worst,” said Jontz. He won five terms as state representative for the Twentieth District (Benton, Newton, Warren, and White Counties), served two years in the Indiana Senate, and captured three terms in the U.S. Congress representing the sprawling Fifth Congressional District in northwestern Indiana that stretched from Lake County in the north to Grant County in the south. Jontz told a reporter that his political career had always “been based on my willingness and role as a spokesman for the average citizen.”

From his first campaign for elective office until his death from colon cancer in 2007, Jontz had an abiding passion for protecting the environment. A dam project that threatened to destroy the scenic Fall Creek Gorge area in Warren County inspired Jontz to enter the political fray, and he continued his conservation efforts in Washington, D.C., sponsoring legislation to help protect old-growth forests in the Pacific Northwest—an attempt that made him a hero to many environmentalists, but enraged timber-industry supporters and fellow congressmen. Although it might sound too grandiose to say that Jontz wanted to save the planet, his former wife, Elaine Caldwell Emmi, noted “that was his ultimate goal, to be a spokesman for those that couldn’t speak—the trees, the animals, the air, the water.”

Defeated in his try for a fourth term representing the Fifth District in 1992, Jontz, two years later, made his final try for political office, failing in an attempt to unseat U.S. Senator Richard Lugar, a fellow Eagle Scout. After his defeat, Jontz left Indiana to work on behalf of a number of progressive causes in an attempt to forge coalitions among labor and environmental groups. He led an unsuccessful campaign to stop the passage of the North American Free Trade Agreement with the Citizens Trade Campaign, helped protect the Endangered Species Act when it was under attack in the 1990s as director of the Endangered Species Coalition, campaigned to save old-growth forests as executive director of the Western Ancient Forest Campaign, and tried to foster progressive causes as president of the Americans for Democratic Action.

According to environmental activist Brock Evans, Jontz’s most enduring legacy is his constant reminder that “even seeming hopeless causes can be won. All we need is the right kind of leader, a person of high spirit and sunny optimism, and, above all, a large and courageous heart.”

The hardbound book with photographs costs $24.95 and is available for purchase through the IHS's Basile History Market or at Amazon.com.
Posted by Ray Boomhower at 11:36 AM No comments: