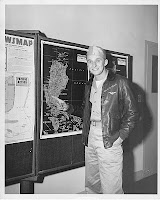 From his days playing a prank on his college instructor at DePauw University that received national news to his wartime feat of shooting down six Japanese planes in just eight minutes, learn about the life and times of World War II ace Alex Vraciu during my noon Monday, July 26, talk at the Eugene and Marilyn Glick Indiana History Center, 450 West Ohio Street, Indianapolis. The talk, part of the Indiana Historical Society's Author Series, is free and open to the public.

Fighter Pilot: The World War II Career of Alex Vraciu, examines how Vraciu, possessed with keen eyesight, quick reflexes, excellent shooting instincts, and a knack for finding his opponent's weak spot, became skilled in the deadly game of destroying the enemy in the skies over the Pacific Ocean. For a period of four months in 1944, Vraciu stood as the leading ace in the U.S. Navy. He shot down nineteen enemy airplanes in the air, destroyed an additional twenty-one on the ground, and sank a large Japanese merchant ship with a well-placed bomb hit.

Vraciu's luck, however, finally ran out on December 14, 1944, during a strafing run against a Japanese airfield before the American invasion to retake the Philippines. Luckily he was almost immediately rushed to safety by a small group of U.S. Army in the Far East guerrillas, who had been battling the Japanese in the area for the past few years. The navy pilot spent the next five weeks with the guerrillas, receiving the honorary rank of brevet major while with them. Vraci finally marched into an American camp carrying with him a captured Japanese Luger pistol and sword.
Posted by Ray Boomhower at 2:09 PM No comments: 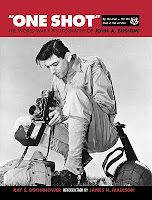 Before losing his life on the island of Eniwetok in the Pacific while on assignment for Yank: The Army Weekly, Bushemi, who had earned the nickname “One Shot” during his work with the Gary Post-Tribune newspaper for his uncanny ability to capture even the liveliest action with just one click of his shutter, had participated in fourteen landings in the Pacific theater. Even a hand injury suffered during the invasion of Kwajalein that left his arm in a sling had not stopped Bushemi from documenting for Yank’s readers the achievements and agonies endured by their fellow soldiers.

Merle Miller, a noted novelist and historian after the war, said his partner specialized in “photography from a rifle’s length vantage point.” Although Bushemi’s duties, which included taking still photographs and shooting movies, did not require him to go into actual combat, Miller said, the photographer did so anyway, becoming the second of four Yank staff members killed in the war. His work with his ubiquitous Speed-Graphic camera earned for Bushemi the distinction of being “Yank’s most outstanding combat photographer,” noted Joe McCarthy, the magazine’s managing editor. In addition to admiring Bushemi’s photographs, McCarthy said that other staff members at the magazine also appreciated “his good-natured sincerity and devotion to his work, which made friends for him and increased the prestige of Yank in every camp and theater of operation that he visited.”
Posted by Ray Boomhower at 10:07 AM No comments:

I'll be at the Yorktown-Mount Pleasant Public Library at 6 p.m. Tuesday, July 13, to talk about my book Robert F. Kennedy and the 1968 Indiana Primary. The program is free and open to the public. The library is located at 8920 West Adaline Street, Yorktown. For information, call 765-759-9723.

Copies of the book will be available for sale. Autographs are always free!
Posted by Ray Boomhower at 7:13 AM No comments:

This annual award seeks to recognize the contributions of Indiana authors to the literary landscape in Indiana and across the nation.

Nominations were submitted from across the state in early spring. Any published writer who was born in Indiana or has lived in Indiana for at least five years was eligible. An eight-member, statewide Award Panel selected the national winner and finalists in three categories from the pool of publicly nominated authors:

* National Author - $10,000 prize: a writer with Indiana ties, but whose work is known and read throughout the country. National authors were evaluated on their entire body of work. Winner: Scott Russell Sanders

* Regional Author - $7,500 prize: A writer who is well-known and respected throughout the state of Indiana. Regional authors were evaluated on their entire body of work. Finalists: Ray Boomhower, Colleen Coble, and Andrew Levy

Award finalists in all three categories will be honored on October 9, 2010 at Central Library in downtown Indianapolis. The day’s events will include free public programs such as author lectures from this year’s Indiana Authors Award honorees, “how to get published” workshops for aspiring writers, and book sales and signings featuring authors from around the state. A ticketed Award Dinner and fundraiser benefiting the Library Foundation will follow that evening where the winner of the Regional Author and Emerging Author categories will each be named. Sanders will serve as the dinner’s keynote speaker. Ticket information for the Indiana Authors Award Dinner is available by contacting the Library Foundation at (317) 275-4700 or by visiting www.indianaauthorsaward.org.
Posted by Ray Boomhower at 9:41 AM No comments:

Mark Twain once observed about Independence Day: "July 4. Statistics show that we lose more fools on this day than in all the other days of the year put together. This proves, by the number left in stock, that one fourth of July per year is now inadequate, the country has grown so."

For those left alive, you might consider attending one of my two talks to be held during the month. They are:

* 6 p.m. Tuesday, July 13, at the Yorktown-Mount Pleasant Township Public Library, 8920 West Adaline Street, where I will be discussing my book Robert F. Kennedy and the 1968 Indiana Primary.

Both programs are free and open to the public.
Posted by Ray Boomhower at 7:34 AM No comments: