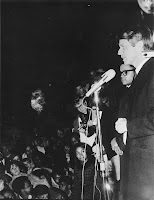 Robert F. Kennedy and the 1968 Indiana Primary was a winner in the Indiana Center for the Book's Best Books of Indiana Awards at a ceremony Saturday, August 29, at the Indiana State Library.

My RFK book won in the nonfiction historical/biographical category against books by such Indiana authors as Norbert Krapf, Michael Marton, and Nancy Kriplen. I had a great time at the ceremony, held in the lovely Indiana Authors Room at the Indiana State Library. Sat next to Norbert, whose memoir I helped to edit at the IHS Press. Norbert had a busy day, as earlier he participated in a poetry reading, also at the ISL. Kudos to the Indiana Center for the Book staff, especially Drew Griffis, and Roberta Brooker, Indiana State Librarian, for hosting a great event.

Winners in other categories for 2009 were:

The five winning authors were all first-time winners in the Best Books of Indiana Awards. The honor was my first Best Book Award in my record-setting fourth year as a contest finalist. University of Evansville Professor Rob Griffith was victorious in the poetry category that included finalist entries by former Best Book winner (2005) David Shumate (Marian University) and Indiana's Poet Laureate, Norbert Krapf. However, Krapf became the first author in competition history to be selected as a finalist in two different categories in the same year. A complete listing of 2009 Best Books of Indiana entrants, including all category finalists, is available at the Indiana Center for the Book's Web site.

Each entry was judged on the quality of writing, with organization and interpretation also considered. Books by Indiana authors or about Indiana and published in 2008 were eligible. This year's winners will be engraved on a plaque in the Indiana Authors Room where one copy of their book will remain indefinitely. Three copies of all 2009 competition entries have been added to the State Library's collection. Two copies of each entry will circulate. Indiana citizens can borrow any Best Books of Indiana title at the State Library or request it via interlibrary loan at their local public library.

The Indiana Center for the Book started the Best Books of Indiana Awards in 2005 to strengthen interest in Indiana's strong literary heritage. The 2009 competition featured 61 titles published between January 1, 2008 and December 31, 2008. The 2010 competition for books published in 2009 will begin accepting entries on October 2, 2009.

I learned yesterday that my book Robert F. Kennedy and the 1968 Indiana Primary is a finalist in the nonfiction-historical/biographical category of the Indiana Center for the Book's 2009 Best Books of Indiana competition.

In addition to my Kennedy book, other finalists are:

Award-winning titles of all former, current and future Best Books finalists will be featured in the State Library's Indiana Authors Room indefinitely. In addition, each category winner will be engraved on a plaque placed in the Indiana Authors Room. Also, three copies of each 2009 contest entry have been added to the Indiana State Library's collections. One of the copies will circulate; the other two copies are available to all Hoosiers at the ISL and via interlibrary loan at their local public library.

An awards ceremony will be held at 4 p.m. on August 29 at the ISL, 315 West Ohio Street, Indianapolis, to announce the winners in the nonfiction-historical/biographical category, as well as finalists in children/young adult, poetry, fiction, and nonfiction-creative/instructional.
Posted by Ray Boomhower at 9:27 AM No comments: