Ernie and Me: An Appreciation

Each August thousands of high school graduates from the Hoosier State and around the country descend upon Bloomington to begin their college careers at Indiana University. That happy lot fell to me in 1978. As a journalism major, I attended many classes at Ernie Pyle Hall, a handsome limestone structure near the university’s that housed the journalism department and the offices of the student newspaper, the Indiana Daily Student. 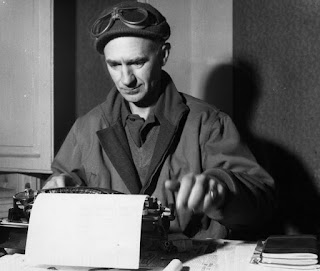 Climbing the steps to enter the building, I often noticed a display window that included a photograph of the famous World War II correspondent after whom the structure was named. Although I had heard of the Dana, Indiana, native, I knew little about the man or his career. In fact, before attending IU, if I thought of Pyle at all, the picture that flashed in my mind was not that of the newspaperman but the actor who played him in the 1945 film The Story of G.I. Joe—Burgess Meredith.

A hasty glance at Pyle’s newspaper career left me less than impressed, typifying as it did, as the correspondent’s biographer James Tobin has noted, a cheerleading style of “war journalism that fell out of favor during the Vietnam War and has not recovered since.” Journalism students of my generation received their inspiration not from old-fashioned reporters such as Pyle but instead from modern investigative journalists such as the Washington Post’s Bob Woodward and Carl Bernstein, men whose work had helped bring down a president, and David Halberstam, who wrote so honestly and brilliantly about this country’s early involvement in .

Nobody is so pure of heart—and so self-righteous—as a freshman journalism student. I began to see the errors of my ways while working for the Indiana State Museum System, which at that time included Pyle’s birthplace home in Dana as one of its state historic sites. While researching Pyle’s life for a brochure about the site, I read a number of his war columns and developed a deep respect for the man most World War II GIs regarded as “the soldier’s friend.” To the millions of Americans on the home front during the war, anxious for news of their loved ones, Pyle’s column offered a foxhole view of the struggle as he reported on the life, and sometimes death, of the average combatant. Later, while working at the Indiana Historical Society, I wrote a youth biography about the Hoosier hero of World War II for the IHS Press. 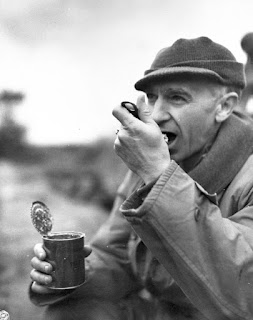 Because of Pyle’s work, poet and veteran Randall Jarrell said, most of the country “felt, in the fullest moral and emotional sense, something that had never happened to them, that they could never have imagined without it—a war.” At the time of his death in the Pacific on April 8, 1945, Pyle enjoyed a worldwide readership, with his work appearing in four hundred daily and three hundred weekly newspapers.

Nobel Prize–winning author John Steinbeck, a Pyle friend, perhaps summed up the reporter’s work best when he told a Time magazine reporter: “There are really two wars and they haven’t much to do with each other. There is the war of maps and logistics, of campaigns, of ballistics, armies, divisions and regiments—and that is General [George] 's war. Then there is the war of the homesick, weary, funny, violent, common men who wash their socks in their helmets, complain about the food, whistle at the Arab girls, or any girls for that matter, and bring themselves through as dirty a business as the world has ever seen and do it with humor and dignity and courage—and that is Ernie Pyle’s war.”

Hamstrung as Pyle was by the restrictions imposed by U.S. Army censors, he nevertheless attempted to convey to his readers the hardships endured by those in uniform. Although Pyle’s columns covered almost every branch of the service—from quartermaster troops to pilots—he saved his highest praise and devotion for the common foot soldier. “I love the infantry because they are the underdogs,” he wrote. “They are the mud-rain-frost-and-wind boys. They have no comforts, and they even learn to live without the necessities. And in the end they are the guys that wars can’t be won without.”

The Hoosier reporter’s columns not only described the soldier’s hardships, but also spoke out on his behalf. In a column from in 1944, Pyle proposed that combat soldiers be given “fight pay,” similar to an airman’s flight pay. In May of that year Congress acted on Pyle’s suggestion, giving soldiers 50 percent extra pay for combat service, legislation nicknamed the Ernie Pyle bill.

In spite of the warmth he felt for the average GI, Pyle had no illusions about the dangers involved with his own job. He once wrote a friend that he tried “not to take any foolish chances, but there's just no way to play it completely safe and still do your job.”

Weary from his work in , Pyle grudgingly accepted what was to be his last assignment, covering the action in the Pacific with the navy and marines. He rationalized his acceptance, noting, “What can a guy do? I know millions of others who are reluctant too, and they can't even get home.” 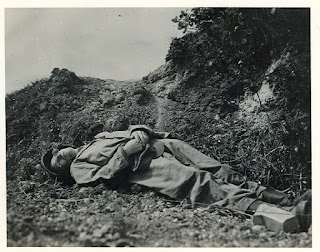 After Pyle’s tragic death on Ie Shima, Edwin Waltz, the reporter’s personal secretary at Pacific Fleet headquarters, went through his personal effects and discovered a draft of a column Pyle had handwritten in anticipation of the war’s end in Europe. The column, which was never published, reveals as does no other piece of writing the terrible personal toll the conflict took on him. He wrote that buried in his brain forever would be the sight of cold, dead men scattered everywhere: “Dead men in such monstrous infinity that you come almost to hate them.” For the reader at home, Pyle wrote, these men were merely “columns of figures, or he is a near one who went away and didn’t come back. You didn’t see him lying so grotesque and pasty beside the gravel road in .” Pyle and his colleagues, however, saw them, and they saw them by the uncountable thousands: “That’s the difference.”

Posted by Ray Boomhower at 7:32 AM No comments:

Writing Advice from the Indianapolis Times

From its start in 1888 until it ceased publication on October 11, 1965, the Indianapolis Times produced "lively and sometimes courageous journalism" for its readers, engaging in a variety of crusades against corruption in local and state government and campaigning for better school lunches for Indianapolis students. 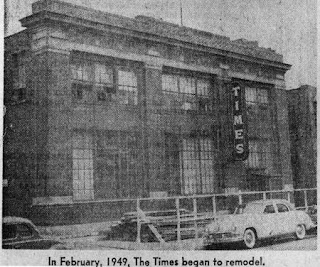 The newspaper also waged an often lonely fight against the Ku Klux Klan during the 1920s--a time when that racist organization held considerable political power throughout the state. The Times won a 1928 Pulitzer Prize for Public Service for its work in "exposing political corruption to Indiana, prosecuting the guilty and bringing about a more wholesome state of affairs in civil government."

In comparison to other newspapers in the city, which had stodgy reputations, the Times, noted one of its former reporters, John Bartlow Martin, was "lively, aggressive, liberal and leaning Democratic, more fun to read and work on. The Times hired you young, paid you little, and promoted you fast." The newspaper's 1954 style book, which gave tips for its reporters and editors, offers tips that are applicable to those engaged in those activities today.

For its reporters (the "Wallpaper Department"), the Times, part of the Scripps-Howard Newspaper chain, recommended them to be, most of all, accurate; dependable; to use good taste;to  read, study people, dig under the surface of things; and to be truthful. "Write your stories as you would tell them to people whose attention you want to catch," the style book said. "If you ramble, they get bored. The same is true with writing." It also reminded its writers to be fair and to keep their opinions out of news stories: "Listen to both sides. Reporting is incomplete with only accusations--hear the defense. It may spoil what you thought was a good story, but its saves you from the worst error--a biased story."

To be a complete reporter, the newspaper believed that their writers needed to remember that their jobs were not done with "just the gathering and writing of your stories. The entire paper is your responsibility. READ IT EVERY DAY--ALL OF IT. Know what it is in it." If reporters followed this dictate, and wrote as they should, the Times believed neither the writers nor subscribers would want to miss any issue. "If you're bored," the style book noted, "pity the poor character who pays the newsboy for the wallpaper you turn out."

For its editors, which the newspaper playfully called "the butchers," the Times advised them to take pride, "not glee," in their work trimming reporter's copy and to always remember that editors and reporters were on the same team, "fight together." While all copy could be cut, as there were "no sacred cows" on the newspaper, it advised the editors that stories could also be expanded. "Edit always in the interest of lucidity and good taste," the style book continued. "Whack, expand, rephrase or rewrite, but do not edit the writer's personality out of the story. The finished product must be the best efforts of many people."

A rule of thumb for the Times was that "our newspaper is always a gentleman." Still, even a good newspaperman could make a mistake. The style book advised its employees never to try to cover mistakes. "Report them to the desk for quick correction," the book noted. "That will save your and our reputation for integrity, and it may prevent a libel suit." Although a newspaper had a constitutional right to freely publish and to make comments, it also had to be "truthful and the comments fair, unbiased, uncolored and truly supported by the facts."

Posted by Ray Boomhower at 8:56 AM No comments: