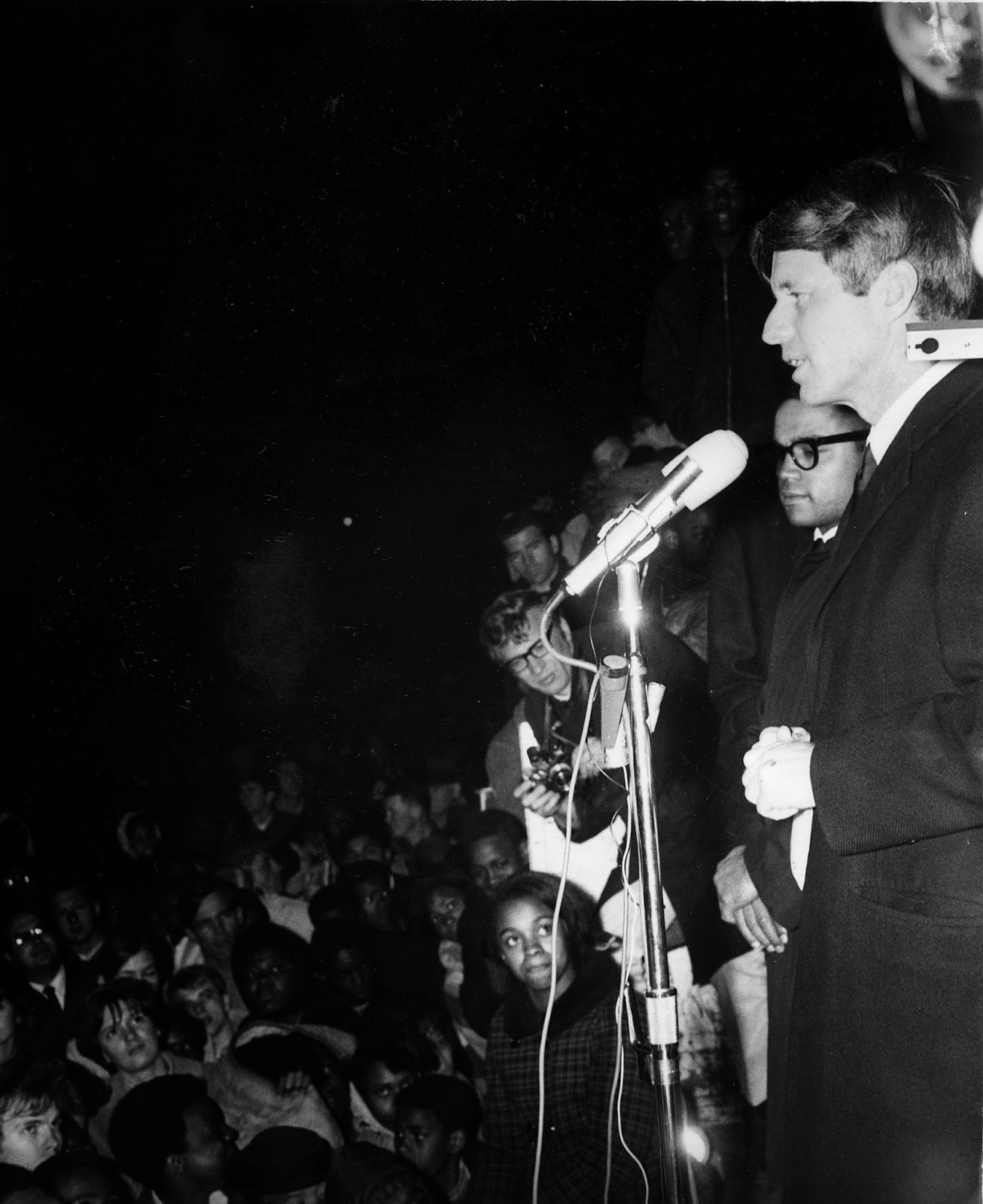 On April 4, 1968, Robert F. Kennedy arrived in Indiana to campaign in the state's Democratic presidential primary. As Kennedy prepared to fly from an appearance in Muncie to Indianapolis, he learned that civil rights leader Dr. Martin Luther King Jr., had been shot outside his hotel in Memphis, Tennessee.

Before his plane landed in Indianapolis, Kennedy heard the news that King had died. Despite warnings from Indianapolis police that they could not guarantee his safety, and brushing off concerns from his own staff, Kennedy decided to proceed with plans to address an outdoor rally to be held in the heart of the city's African American community. On that cold and windy evening, Kennedy broke the news of King's death in an impassioned, extemporaneous speech on the need for compassion in the face of violence. It has proven to be one of the great speeches in American political history.

At 1 p.m. Saturday, April 4, at the Pendleton Community Public Library, 595 East Water Street, Pendleton, Indiana, I will give a talk explaining what brought the politician to Indiana that day, and explore the characters and events of the 1968 Indiana Democratic presidential primary in which Kennedy, who was an underdog, had a decisive victory.

For more information, contact the library at (765) 777-7527. The talk will be free and open to the public and will be in the library's Community Room. In addition, copies of my book, Robert F. Kennedy and the 1968 Indiana Primary, will be available for sale.
Posted by Ray Boomhower at 11:41 AM No comments: 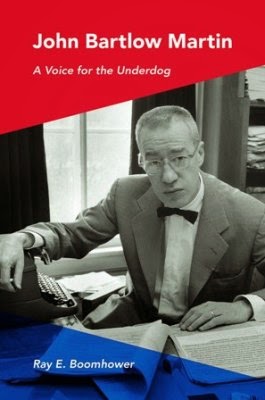 During the 1940s and 1950s one name, John Bartlow Martin, dominated the pages of the "big slicks," mass-circulation magazines such as the Saturday Evening Post. A former reporter for the Indianapolis Times who survived an often unsettling life in Indianapolis, Martin was one of but a few freelance writers in the country able to support himself from his work. His peers lauded him as "the best living reporter" and the "ablest crime reporter in America."

Martin's life as a freelance writer, plus his time as a speechwriter with every Democratic presidential candidate from Adlai Stevenson in 1952 to George McGovern in 1972, in explored in my new biography John Bartlow Martin: A Voice for the Underdog, recently published by Indiana University Press.

What set Martin apart from his journalist contemporaries was his deep and abiding concern for the common man in twentieth-century America. "Most journalists," he noted, "make a living by interviewing the great. I made mine by interviewing the humble--what the Spaniards call los de abajo, those from below."

During his career Martin, posthumously inducted into the Indiana Journalism Hall of Fame in 1999, also produced a number of books based upon his magazine work, including a history of the Hoosier State (Indiana: An Interpretation, 1947) that historian Arthur M. Schlesinger Jr. called the "best book on Indiana." Martin made his mark on American history not just with his writing skills, but also his political acumen. He served as a key speechwriter and adviser for the presidential campaigns of the prominent Democrats of the 1950s, 1960s, and 1970s--Adlai Stevenson, John F. Kennedy, Lyndon B. Johnson, Robert F. Kennedy, Hubert H. Humphrey, and George McGovern.

As a result of his efforts on John Kennedy's behalf in the 1960 presidential contest, Martin received an appointment from the president as the U.S. ambassador to the Dominican Republic, a country Martin had visited as a young man. He worked tirelessly to support the Republic's first democratically elected government, but saw his hopes dashed by a military coup. Before his diplomatic service, Martin had earned a small measure of fame by helping write a speech for Newt Minow, the new Federal Communications Commission chairman, for a speech before the National Association of Broadcasters that introduced the phrase describing television--"a vast wasteland"--into the nation's consciousness.

The hardback, approximately 400-page book is available directly from IU Press or from Amazon and IndieBound.

On March 19 Indiana University Press will publish my book John Bartlow Martin: A Voice for the Underdog. You can learn more about the book and Martin's life and career by listening to a podcast I did with IU Press staff member Laura Baich.

In addition, Dan Carpenter, former columnist with the Indianapolis Star, did a story about the book for Sky Blue Window, an online magazine.


Posted by Ray Boomhower at 8:51 AM No comments: