What is a Hoosier? 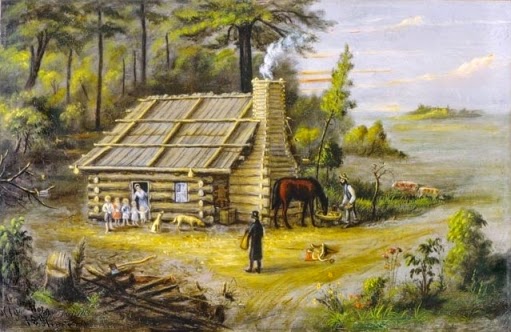 On January 1, 1833, just seventeen years after Indiana had become the nineteenth state in the Union, the Indianapolis Journal printed in its “Carrier’s Address” as a New Year’s greeting to its readers a poem by John Finley of Richmond, Indiana. Finley’s poem, “The Hoosier’s Nest,” which praised the state and proclaimed that countless “men of every hue and fashion” were flocking to the “Hoosier nation,” received instant acclaim and was reprinted in numerous newspapers throughout the country and even internationally.

Since that first appearance in the Journal, the term “Hoosier” has become one of America’s most recognizable state nicknames—along with “Buckeyes” for those from Ohio, “Badgers” from Wisconsin, “Wolverines” from Michigan, and “Tarheels” for North Carolina residents.

Throughout its history, Indiana has been seen by many, noted Indiana historian and journalist John BartlowMartin, as “a bucolic place inhabited by pleasant, simple, neighborly folk.” It was a state where a radical thinker like Eugene Debs, Hoosier union organizer, writer, lecturer, and five-time presidential hopeful for the Socialist party, could maintain close friendships with some of the richest men in his hometown of .

This “Indiana idea,” as Martin called it, contains a “good deal of myth,” and also masks from view the less desirable aspects of the Hoosier character, including a time in the 1920s when the Ku Klux Klan under D.C. Stephenson controlled state government. Although the “Indiana idea” has undergone a metamorphosis, as rural and agriculture has been supplanted by urban and industrial, those ideas still have a powerful hold on the way in which Hoosiers view their past. “Like any myth,” Martin noted, “it has some truth in it.”

One question about the state always seems to linger in the back of the minds of visitors: “What is a Hoosier?” Since Finley’s poem popularized the term, speculation about the origin of Hoosier has run rampant. The late historian JacobPiatt Dunn Jr. conducted lengthy research into the history of the word. Dunn found out that Hoosier was used frequently in the South in the nineteenth century to refer to woodsmen or rough hill people. He traced the word back to “hoozer,” a term from the dialect of . Hoozer is from the Anglo-Saxon word “hoo,” meaning high or hill. In the dialect, the word “hoozer” meant anything unusually large, like a hill. Descendants of English immigrants brought the name with them when they settled in the hill country of southern .

Other theories abound as to the origin of Hoosier, providing the following entertaining anecdotes:

The puzzle about the meaning of Hoosier has stirred not only scholarly debate, but controversy as well. In 1987 the office of then U.S. Senator Dan Quayle engaged in a battle with Webster’s Third International Dictionary about its definition of the word. In its alternative meanings for Hoosier, the dictionary defined the noun form as “an awkward, unhandy or unskilled person, especially an ignorant rustic.” The verb form mean, the dictionary added, “to loaf on or botch a job.”

New York senator Alfonse D’Amato even used the dictionary’s uncomplimentary definition to predict defeat for Indiana University in its battle for the NCAA basketball championship against Syracuse University that year. (IU, thanks to guard Keith Smart’s timely last-second shot, prevailed, 74–73.)

Quayle’s press secretary, Peter M. Lincoln, struck back at Merriam-Webster, Inc., by threatening to remove the dictionary from the senator’s office unless the company changed its definition for Hoosier. also invented a new word, “webster,” whose form meant “to mis-define a word stubbornly and outrageously. The people of Merriam-Webster are guilty of ‘webstering.’”

The search for the meaning of the word Hoosier continues. In 1995 William D. Piersen, Fisk University professor of history, in an article for the IndianaMagazine of History, theorized that the term Hoosier actually came from an itinerant African American minister named Harry Hoosier, a former slave called by one Methodist clergyman “one of the best Preachers in the world.” Accepting his theory, Piersen wrote, would “offer a plausible and worthy first Hoosier—‘Black Harry’ Hoosier—the greatest preacher of his day, a man who rejected slavery and stood up for morality and the common man.” Whatever the answer to the ubiquitous question “What is a Hoosier?”, the work of the state’s scholars, writers, politicians, artists, and other citizens is helping to weld a new “Indiana idea” for the twenty-first century.
Posted by Ray Boomhower at 7:59 AM No comments: