Indiana has been lucky when it comes to producing men to fill the United State's second-highest office, earning a distinction as the "Mother of Vice Presidents." Six men from the Hoosier State have been elected vice president: Schuyler Colfax in 1868, Thomas A. Hendricks in 1884, Charles W. Fairbanks in 1904, Thomas R. Marshall in 1912 and 1916, J. Danforth Quayle in 1988, and Michael Pence in 2016.

When it comes to luck after being elected, however, Hoosier vice presidents have not been very fortunate. Some of the missteps experienced by these politicos include Colfax's implication in the Credit Mobilier scandal during President Ulysses S. Grant's first term; Hendricks's dying just eight months after being sworn into office; teetotaler Fairbanks's embarrassment over the infamous "cocktail affair" at his Indianapolis home; and Marshall's anxious uncertainty about his role after a stroke incapacitated President Woodrow Wilson. Indiana's vice presidents might agree with Texas congressman John Nance "Cactus Jack" Garner's description of the office as not being "worth a bucket of warm spit." 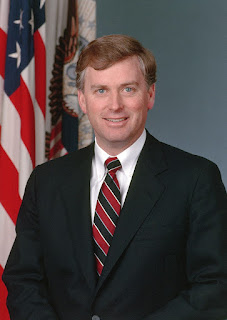 But perhaps no vice president from the nineteenth state has endured more pressure than Quayle, the surprise choice of George H. W. Bush as his GOP running mate in the 1988 presidential contest with Democrat Michael Dukakis. From the first questions about his service in the Indiana National Guard during the Vietnam War to his unfortunate misspelling of the word "potato" during the Bush/Quayle reelection effort, Quayle was under intense (some said brutal) examination by the nation's media. Richard Fenno Jr., who studied Quayle's Senate career, told the Washington Post when it produced a series of articles on the vice president that if "one wanted to prescribe a sitting-duck target for the community of political reporters who were rushing to judgment, one could hardly have improved upon J. Danforth Quayle. I believe there was a cultural--almost a tribal--element in their [the media's] early reception and treatment of him."

Born in Indianapolis on February 4, 1947, Quayle and his family moved to Huntington a year later, living in a house at 1317 Polk Street while his father, James, worked as the business manager for the Huntington Herald-Press. When he was eight years old, the young Quayle moved with his family too Phoenix, Arizona, where James worked as public relations and personnel director for the Arizona Republic and Phoenix Gazette. In 1963, when Quayle's father purchased the Huntington Herald-Press from Eugene Pulliam, the Quayles returned to Huntington.

After graduating from Huntington High School, where he was a member of the gold team and wrote for the high school newspaper, The Whisper, Quayle attended DePauw University. It was at the Greencastle university that Quayle had the opportunity to meet a political idol, Ronald Reagan, at a dinner at the Indiana State Fairgrounds. Graduating from DePauw in 1969 with a bachelor of arts degree in political science, Quayle joined the Indiana National Guard, serving there through 1975. Despite a less than stellar academic record while at DePauw, Quayle was able to gain entrance into the Indiana University at Indianapolis Law School. It was in law school that he met Marilyn Tucker; they married on November 18, 1972, and received their law degrees two years later. They moved to Huntington in 1975. Marilyn ran the couple's law office and Dan worked as associate publisher at the Herald-Press.

Quayle's successful Indiana political career got its start in 1976, when Allen County Republican Party Chairman Orvas Beers and Fort Wayne News Sentinel editor Ernie Williams asked him to run against incumbent congressman J. Edward Roush, who had been in office for sixteen years. Running an aggressive campaign, Quayle upset the popular Roush by 19,401 votes. Reelected to Congress with 64.4 percent of the vote in 1978, Quayle set his sights on a higher political office: U.S. senator. In the 1980 election, he took on Democrat Birch Bayh, who had been in office since defeating Homer Capehart in 1962. Quayle was once again victorious over a longtime Democratic incumbent, capturing 53.8 percent of the vote to Bayh's 46.2 percent.

As a senator, Quayle cosponsored the Job Training Partnership Act  with Democratic senator Ted Kennedy. Quayle's name would not be known nationally, however, until Bush picked him as his running mate at the 1988 Republican National Convention in New Orleans. 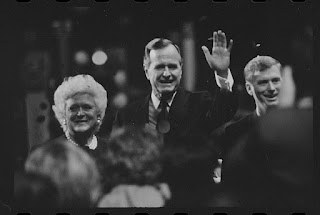 To the citizens of Huntington,  association with the country's forty-fourth vice president has always been something to boast about, including the creation of the Dan Quayle Center and Museum in 1993 (today the Quayle Vice Presidential Learning Center). It is no surprise that the community in which Quayle was raised never enjoyed cordial relations with the national media. After Quayle received the GOP's nod as its vice presidential candidate, he traveled to Huntington on August 19, 1988, for a rally on the south lawn of the Huntington County Courthouse.

The several thousand people who cheered the hometown boy who made good did not offer the same greeting to the national media that grilled Quayle about his service in the Indiana National Guard during the Vietnam War and the means by which he gained a place with a Guard unit. Questions asked at a press conference following the rally, which was broadcast to the crowd over a public-address system, drew chants of "Boring, Boring" from the partisan crowd. The event, according to Washington Post reporters Bob Woodward and David S. Broder, "became one of the ugliest confrontations in the annals of press and politics." Recalling the turmoil, Quayle noted: "There was almost a feeling of hate out there."

Quayle, however, was not the first Indiana vice president to receive hostile attention. It seems that making sport of Hoosier politicians, trapped in an office called "about as useful as a cow's fifth teat" by Harry Truman, has been a time-honored tradition among political pundits.

In discussing Colfax in a letter to his wife, GOP insider Carl Schurz described the abilities of the Speaker of the House as "not distinguished but . . . just sufficient to make him acceptable to the masses. They are fond of happy mediocrity." Humorist Finley Peter Dunne warned President Theodore Roosevelt, contemplating a journey on a new navy submarine, that he "really shouldn't do it, unless you take Fairbanks with you." A Boston newspaper described Hendricks as a "politician of the shilly-shallying order." And one of Indiana's own, Marshall, proclaimed that the state "has perhaps no towering mountain peaks, but it has surely furnished as many first-grade second-class men in every department of life as any state in the Union."
Posted by Ray Boomhower at 11:02 AM No comments: