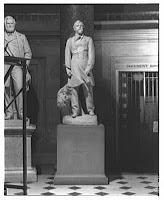 At 6:30 p.m. Monday, November 21, I will be at the Lebanon Public Library, 104 East Washington Street, Lebanon, Indiana, to talk about the life and times of Hoosier author and Civil War general Lew Wallace. My talk before the local Civil War Roundtable will concentrate on Wallace's service in the war, including his early successes with the Eleventh Indiana Volunteer Infantry Regiment, saving the day at the Battle of Fort Donelson, the controversey about his actions at the Battle of Shiloh, and the resurrection of his career thanks to helping save such Union cities as Cincinnati and Washington, D.C. (Battle of Monocacy)

In preparing my talk, I realized that while Wallace is best known today for writing the best-selling novel Ben-Hur: A Tale of the Christ, his Civil War soldiering does not get the attention it deserves. On January 11, 1910, a large crowd gathered at the National Statuary Hall at the U.S. Capitol in Washington for the unveiling of a Wallace statue to join the one of Oliver P. Morton representing Indiana. Although Wallace was the first author to be represented with a statue, you will notice that in the photograph he is not in author garb, but wearing his Civil War uniform.
Posted by Ray Boomhower at 10:38 AM No comments:

For the ninth year in a row (a new record, perhaps), I will be participating in the annual Holiday Author Fair from noon to 4 p.m. at the Indiana History Center, 450 West Ohio Street, Indianapolis. (That's me with Philip Gulley at the 2009 Author Fair.)

More than 60 Hoosier authors will be at the Fair selling their wares. Among those in attendance will be filmmaker Angelo Pizzo, Chef Daniel Orr and local media personalities Howard Caldwell, Dick Wolfsie and Lou Harry along with bestselling authors James Alexander Thom and Dark Rain Thom and 2009 Indiana Poet Laureate Norbert Krapf.

There will be speakers throughout the day, holiday music, refreshments, and free gift wrapping. The Author Fair is free with admission to the Indiana Experience. For complimentary admission tickets, please drop me an e-mail at reboomer@yahoo.com.
Posted by Ray Boomhower at 11:14 AM No comments:

Here's an interview I did a few months back with Smithville Communication's Rob Ramsey to help highlight the 50th anniversary of Gus Grissom's Liberty Bell 7 mission into space. Here is the interview.
Posted by Ray Boomhower at 8:33 AM No comments:

To commemorate the upcoming Veteran's Day holiday, I will be at the UPUI Barnes & Noble Bookstore from 1:30 p.m. to 4 p.m. Tuesday, November 8, signing copies of my World War II-themed books.

The books that will be available are:

* Fighter Pilot: The World War II Career of Alex Vraciu
* The Soldier's Friend: A Life of Ernie Pyle
* "One Shot": The World War II Photography of John A. Bushemi
Posted by Ray Boomhower at 8:36 AM No comments: