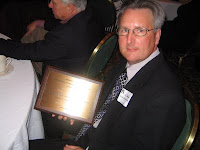 I won first place in the personality profile magazine or special interest publication or periodical for my article in the fall 2010 issue of Traces of Indiana and Midwestern History titled "The People's Choice: Indiana Congressman Jim Jontz."

I also received a third place award in the nonficition book category for my IHS Press publciation Fighter Pilot: The World War II Career of Alex Vraciu. Ted Evanoff and Abe Aamidor won first place in the book category for their work At the Crossroads: Middle America and the Battle to Save the Car Industry.
Posted by Ray Boomhower at 7:15 AM No comments: 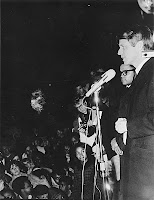 On April 4, 1968, U.S. Senator Robert F. Kennedy came to Indianapolis as part of his campaign for the Indiana Demcoratic presidential primary. Instead of a standard stump speech, he passed along the tragic news of the death of Martin Luther King Jr. to a stunned crowd at the Broadway Christian Center at Seventeenth and Broadway streets. The forty-third anniversary of that historic speech will be commemorated in a program from 5 p.m. to 6:30 p.m. Monday, April 4, at the Martin Luther King Jr. Park in Indianapolis.

At 7 p.m. I will be attending a special screening of Don Boggs's documentary "A Ripple of Hope" at the IUPUI University Library's Lilly Auditorium. I will be available after the documentary to discuss aspects of the Kennedy campaign in Indiana from my book Robert F. Kennedy and the 1968 Indiana Primary.

In addition, you can be part of the crowd there that night by visiting the Indiana Historical Society's exhibition "You Are There 1968: Robert F. Kennedy Speaks," which will be at the IHS through April 14, 2012.
Posted by Ray Boomhower at 8:05 AM No comments: