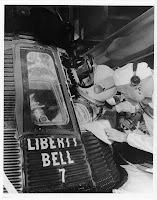 Had a great time Thursday evening in Mitchell, Indiana, where I spoke as part of the commemoration of the 50th anniversary of Gus Grissom's Liberty Bell 7 mission on July 21, 1961.

I talked about Gus and the Apollo 1 tragedy before a large and appreciative audience in the Gus Grissom Auditorium at Mitchell High School. Probably the biggest response I got during my talk came early on when I explained why I decided to write about Gus's life--as a way to rescue his reputation from the blackening it received thanks in some ways to Tom Wolfe's book The Right Stuff, and especially from director Philip Kaufman's 1983 movie of the same name. It was also good to see Gus's brother, Lowell Grissom, whom I previously met at the rededication of the Grissom Memorial at Spring Mill State Park Also at the talk were a group of engineers from McDonnell Aircraft Corporation, the company that built both the Mercury and Gemini spacecraft.

The Mitchell community should be proud of the way it honored one of its famous native sons. Thanks to the Mitchell Community Public Library for inviting me to be a part of the celebration.
Posted by Ray Boomhower at 8:33 AM No comments: