I will be appearing on the Hoosier History Live! radio program to discuss my book Fighter Pilot: The World War II Career of Alex Vraciu at 11:30 a.m. Saturday, April 10, on WICR, 88.7 FM.

Hoosier History Live! is a weekly radio adventure through Indiana history, live with call-in, hosted by Nelson Price, historian and author of Indiana Legends and Indianapolis: Then and Now. Each week, the program includes a featured guest and topic, a call in from The Roadtripper with a tip about a Hoosier heritage-related road trip, and a Hoosier History Trivia question, complete with a prize for the correct answer. It is the nation's first and only call-in talk-radio show about history, premiering as a live weekly show on Jan. 12, 2008. The call-in number is (317) 788-3314.
Posted by Ray Boomhower at 2:03 PM No comments: 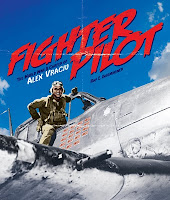 The sixth volume in the IHS Press's youth biography series, the book explores the wartime service of Vraciu. A graduate of DePauw University, Vraciu learned to fly during his college years through a government program and joined the navy before America was thrust into the war following the Japanese attack on Pearl Harbor on December 7, 1941.

Possessed with keen eyesight, quick reflexes, excellent shooting instincts, and a knack for finding his opponent’s weak spot, Vraciu became skilled in the deadly game of destroying the enemy in the skies over the Pacific Ocean. For a period of four months in 1944, Vraciu stood as the leading ace in the U.S. Navy. He shot down nineteen enemy airplanes in the air, destroyed an additional twenty-one on the ground, and sank a large Japanese merchant ship with a well-placed bomb hit.

Vraciu’s luck, however, finally ran out on December 14, 1944, during a strafing run against a Japanese airfield before the American invasion to retake the Philippines. Luckily he was almost immediately rushed to safety by a small group of U.S. Army in the Far East guerrillas, who had been battling the Japanese in the area for the past few years. The navy pilot spent the next five weeks with the guerrillas, receiving the honorary rank of brevet major while with them. Vraci finally marched into an American camp carrying with him a captured Japanese Luger pistol and sword.

Vraciu, who is retired and living in California, was reluctant at first when I wrote him asking if he would be open to having me write about his life. He agreed to cooperate, however, when he learned that the book was part of the IHS Press's youth biography series, aimed at a middle school/high school audience. Vraciu has spent much time sharing his experience in the war with young people.

Fighter Pilot costs $17.95 and can be purchased through the IHS's History Market.
Posted by Ray Boomhower at 6:58 AM No comments: