Congratulations to Margaret McMullan, author of the book When I Crossed No-Bob, for winning the children's/young adult category in the Indiana Center for the Book's annual Best Books of Indiana contest. McMullan's work beat out my youth biography of May Wright Sewall and Julie Young's biography of Saint Theodora Guerin, both published by the Indiana Historical Society Press.

Winners in other categories included Susan Neville in non-fiction for her book Sailing the Inland Sea, published by Quarry Books, and Kirk Curnutt in fiction for his book Breathing Out the Ghost, published by River City Publishing.

The Center did an impressive job with the award ceremony, held on Saturday, August 16, in the Indiana Authors Room at the Indiana State Library. Each category's winning title and author will be engraved on a plaque in the Indiana Authors Room. Two copies of all 2008 competition entries have been added to the State Library's collection. One copy of each entry will circulate. Indiana citizens can borrow any Best Books of Indiana title at the State Library or request it via interlibrary loan at their local public library.
Posted by Ray Boomhower at 7:34 AM No comments: 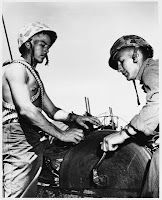 The Gary Post-Tribune in its Sunday "Neighbors" section featured an article on my recent talk at the Lake County Public Library on famed World War II photographer John A. Bushemi.

American GIs and marines (like the ones captured here by Bushemi sharpening their K-Bar knives) who participated in the invasions of such far-flung Pacific Ocean locations as New Georgia, Makin, Tarawa, Kwajalein, and Eniwetok during World War II could always count on a blistering reception from the Japanese forces defending those isles. They could also depend on their efforts being documented for their fellow soldiers and folks back home by Bushemi.

Assigned to Yank, the weekly magazine written by and for enlisted men, Bushemi specialized in "photography from a rifle’s length vantage point," according to his colleague Merle Miller. His work with his ever-present Speed Graphic camera earned Bushemi the distinction of being the "outstanding combat photographer" for the magazine, noted its managing editor Joe McCarthy. That distinction came as no surprise to those who knew Bushemi in Gary, where he had received numerous awards for his work as a photographer for the Gary Post-Tribune. While working for the newspaper, he had earned the nickname "One Shot" for his uncanny ability to capture even the fastest action with just one click of his camera’s shutter
Posted by Ray Boomhower at 9:11 AM No comments: