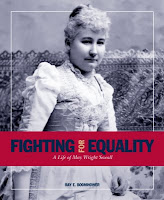 Just received word today that my youth biography Fighting for Equality: A Life of May Wright Sewall, published by the Indiana Historical Society Press, is a finalist in the children/young adult category of the 2008 Best Books of Indiana Competition sponsored annually by the Indiana Center for the Book.

The other two finalists in the category are Julie Young for her book A Belief in Providence: A Life of Saint Theodora Guérin, also published by the IHS Press, and Margaret McMullan for When I Crossed No-Bob, published by Houghton Mifflin.

This competition began in 2005 to highlight Indiana's ongoing literary successes. Books by Indiana authors or about Indiana, published between January 1 and December 31 of the previous year are eligible. In addition to the children/young adult category, other categories include fiction, non-fiction, and poetry.

This is the third time one of my youth biographies has been named a finalist in the Best Books of Indiana competition. Both The Soldier's Friend: A Life of Ernie Pyle and The Sword & the Pen: A Life of Lew Wallace, failed to win. Perhaps the third time will be the charm when the winners are announced in a 1 p.m. Saturday, August 16, ceremony at the Indiana State Library.
Posted by Ray Boomhower at 1:56 PM No comments:

On this date in 1961 Hoosier astronaut Virgil I. "Gus" Grissom became the second American and the third human to rocket into space as a Redstone rocket blasted his Libert Bell 7 spacecraft into a suborbital flight lasting approximately fifteen minutes.

Grissom's flight, however, is best known today for what happened after he successfully splashdowned in the Atlantic Ocean. As I noted in my biography of Grissom, written as part of the Indiana Historical Society Press's Indiana Biography Series, the astronaut was lying flat on his back waiting for the helicopter’s call that it had hooked onto the spacecraft, Grissom turned his attention for a second to the knife he had placed in his survival pack, wondering if he could carry it out with him as a souvenir instead of leaving it in the spacecraft. “I heard the hatch blow—the noise was a dull thud—and looked up to see blue sky out the hatch and water start to spill over the doorsill,” he told National Aeronautics and Space Administration officials. Acting on instinct, Grissom quickly tossed his helmet to the floor, grabbed the right side of the instrument panel, and exited the spacecraft. “I have never moved faster in my life,” he noted. “The next thing I knew I was floating high in my suit with the water up to my armpits.”

Inside NASA there existed “two vehement camps” with opinions on what happened. One side believed Grissom had either panicked or hit the switch by accident, causing the hatch to blow. Another faction pointed to some unknown problem with the machine and held the astronaut blameless for the accident.

The debate on the question of whether or not Grissom was to blame for the hatch’s firing seemed about to be put to rest for good in May 1999 when Curt Newport, whose twin passions as a child had been spaceflight and undersea exploration, found the long-abandoned spacecraft on the bottom of the Atlantic Ocean. In July, Newport, joined by Guenter Wendt, a German engineer known as the "Pad Leader" by American astronauts and Jim Lewis, the helicopter pilot on the original Liberty Bell 7 recovery, returned to the site and, at 2:15 a.m. July 20—thirty-eight years almost to the day it had been blasted into space—hoisted the capsule off of the ocean floor and onto the deck of the ship Ocean Project.

As a restoration team at the Kansas Cosmosphere and Space Center cleaned and reassembled the spacecraft’s 27,000 separate parts, they discovered some intriguing material to help the case that Grissom had not panicked on his flight and prematurely blown the hatch. The museum team, which completed its work in March 2000, discovered Grissom’s waterlogged checklist, which had been about a third of the way completed before the hatch blew. “As far as I’m concerned, that checklist pretty much cleared Grissom of any wrongdoing in connection to what happened,” said John Glass, who supervised the capsule’s restoration at the Cosmosphere.

In addition, Greg “Buck” Buckingham, a key figure in the restoration effort, pointed out that there were no burn marks from the explosive cord that had been intended to trigger the hatch’s release. If the explosive cord never detonated, Buckingham theorized that the spacecraft had slammed hatch-down into the ocean when it returned to earth, causing a titanium strip along the hatch sill to buckle and the seventy explosive bolts to fire one by one. “Most telltale to me are the lack of burn marks,” said Buckingham.
Posted by Ray Boomhower at 7:14 AM No comments: