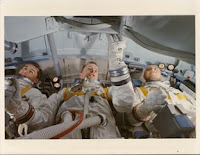 On Friday, January 27, 1967, the National Aeronautics and Space Agency engaged in yet another step on its long journey of meeting late President John F. Kennedy’s goal announced six years earlier of landing a man on the moon before the end of the decade.

On that day, three American astronauts participated in simulated countdown of the Apollo spacecraft at the Kennedy Space Center’s Pad 34. At one o’clock in the afternoon astronauts Roger Chaffee, a rookie and the youngest person ever selected to join the astronaut corps; Ed White, the first American to walk in space; and Hoosier native Gus Grissom, the first American to fly in space twice; entered the Apollo command module, built by North American Aviation. They never made it out alive.

The tragic events of the Apollo 1 disaster will be explored in my talk "Tragedy at Pad 34: Gus Grissom and the Apollo 1Fire," to be given at 10 a.m. on Thursday, June 12, at the Highland Branch of the Lake County Public Library, 2841 Jewett St., in Highland, Indiana.

In addition to talking about the fire that took the life of the three American astronauts, I will be autographing copies of my biography of Grissom, born and raised in Mitchell, Indiana. The book was the second volume in the Indiana Historical Society Press's Indiana Biography Series.

For more information on the program, contact the Highland library branch by calling
(219) 838-2394.
Posted by Ray Boomhower at 1:48 PM No comments:

I will be talking about and signing copies of my new book Robert F. Kennedy and the 1968 Indiana Primary at two events in June.

At 1 p.m. on Saturday, June 7, I will be in the Bard Room at the Morrisson-Reeves Library in Richmond, Indiana. The library is located at 80 North 6th Street in Richmond. The event is free and open to the public. For information, call the library at (765) 966-8291.

At 2:30 p.m. on Sunday, June 8, I will be at Barnes and Noble Booksellers Store at 4601 Grape Road in Mishawaka, Indiana, my hometown, for a booksigning. The store is located three blocks south of University Park Mall. For more information, contact the store at (574) 277-9482.

To learn more about Robert F. Kennedy and the 1968 Indiana Primary, here are some helpful links:

* An interview with me about the book with the Bedford Times-Mail.

* An excerpt from the book published by the Fort Wayne Journal-Gazette.

* Listen to a radio interview with me by David Johnson of Bloomington's WFIU.
Posted by Ray Boomhower at 2:13 PM No comments: