All the Way with RFK 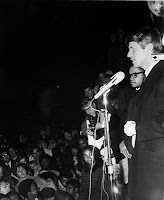 I'll be leading a panel discussion discussing the inside story of how and why Robert F. Kennedy decided to enter the 1968 Indiana Democratic presidential primary at 11 a.m. Saturday, February 19, at the Indiana History Center, 450 West Ohio Street, Indianapolis. The session also features those who experienced the RFK campaign in the Hoosier State, including Michael Riley, Louie Mahern, and Abie Robinson.

The program is part of the Indiana Historical Society member preview for the new exhibition "You Are There 1968: Robert F. Kennedy Speaks," which re-creates Kennedy's famous April 4, 1968, speech announcing the death of Martin Luther King Jr. to a stunned campaign rally crown at 17th and Broadway streets in Indianapolis.

From noon to 2 p.m. at the IHS's Baile History Market, I will be signing copies of my book Robert F. Kennedy and the 1968 Indiana Primary, published by Indiana University Press in 2008. Donald Boggs of Anderson University will also be on hand to sign copies of the DVD of his award-winning documentary about Kennedy's Indianapolis speech, A Ripple of Hope. The film will be shown in the Basile Theater at 1 p.m. and 3 p.m. Boggs will answer questions about his documentary following each screening.
Posted by Ray Boomhower at 11:33 AM No comments: