I will be one of five Hoosier writers part of the Dyslexia Institute of Indiana's fourth annual Indiana Authors Breakfast at 8:30 a.m. on Saturday, April 27, at the Meridian Hills Country Club, 7099 Spring Mill Road, Indianapolis.

The breakfast, which will be emceed by Dick Wolfsie of WISH-TV Channel 8, will feature, in addition to me, Indiana authors Marie J. Albertson, Lorene Burkhart, Wes Gehring, and Ken Turchi.


Posted by Ray Boomhower at 8:09 AM No comments: 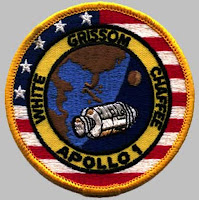 January 27, 2013, marks the forty-sixth anniversary of the Apollo 1 tragedy that took the lives of astronauts Virgil I. "Gus" Grissom, Ed White, and Roger Chaffee. I will be presenting  programs on the fire that almost halted America's efforts to put a man on the moon and return him safely to earth before the end of the 1960s at two public libraries in the state.

I will be giving my talk, "Tragedy on Pad 34: Gus Grissom and the Apollo 1 Fire" at 10 a.m. on Saturday, January 12, at the Pendleton Community Public Library, 595 East Water Street, Pendleton, Indiana, and at 2 p.m. Sunday, January 27, at the Logansport Cass County Public Library, 616 East Broadway, Logansport, Indiana. Both programs are free and open to the public. Also, I will have available for sale at both locations my biography of the Hoosier astronaut, Gus Grissom: The Lost Astronaut, first published in 2004 by the Indiana Historical Society Press as part of its Indiana Biography Series.
Posted by Ray Boomhower at 9:49 AM No comments: