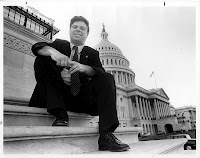 I will be offering a sneak peak of my new book, The People's Choice: Congressman Jim Jontz of Indiana, as part of the sixty-third annual Americans for Democratic Action convention on Saturday, June 16, at the University of Illinois at Chicago, 750 South Halsted, Chicago.

I will be part of the session "Working Families Win and Jim Jontz" from 9 a.m. to 10 a.m. Joining me will be Don Kusler, Executive Director of Americans for Democratic Action and Project Director of Working Families Win. In my presentation, I will be concentraing on Jontz's early life growing up in Indianapolis, Indiana, where he developed his commitment to the environment and progressive values. I will explore his work on behalf of the environment while a student at Indiana University in Bloomington, his effort to stop a U.S. Army Corps of Engineers dam and reservoir project in Warren County, his long shot run for office as a state representative, and his subsequent career in the Indiana General Assembly.

My biography of Jontz will be released in early fall 2012 by the Indiana Historical Society Press. The hardback book with numerous black-and-white photographs of Jontz during his lifetime will cost $24.95.
Posted by Ray Boomhower at 9:34 AM No comments: