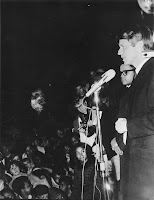 Saturday, April 4, marks the forty-first anniversary of Robert F. Kennedy's 1968 speech at Seventeenth and Broadway streets in Indianapolis announcing to a crowd that Martin Luther King Jr. had been shot and killed. Kennedy's poignant remarks that evening helped avert potential violence in the community, as the crowd returned peacefully to their homes. In a number of major American cities, the news of King's death had sparked riots and destruction; Indianapolis remained peaceful.

In conducting research for my book on Kennedy's 1968 campaign in the Indiana Democratic presidential primary, I examined how and why Kennedy was in Indianapolis for his emotional speech. Indianapolis has paid homage to Kennedy's speech with a memorial at Martin Luther King Jr. Park at 1702 North Broadway Street that includes a Landmark for Peace sculpture of King and Kennedy. Unfortunately, the site is away from the hustle of the downtown area, and many visitors to the city are unaware of its existence.

The memorial's isolation may soon end if community leaders have their way. Organizers recently announced a $3 million fund-raising campaign to improve and expand the memorial. According to an article in the Indianapolis Star, the expansion would include:

* An eternal flame incorporated into a new sculpture or sculptures by Greg Perry, the artist who designed the existing memorial.

* An amphitheater to seat 75 to 200 people, depending on the final design.

* Twin elliptical walkways, one for King and one for Kennedy, that slope along a wall that abruptly ends to symbolize the sudden end of their lives.

A ceremonial groundbreaking will be held at the memorial from 5 p.m. to 6:30 p.m. on Saturday, April 4.
Posted by Ray Boomhower at 7:18 AM No comments: 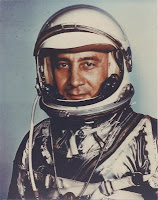 I will be appearing on Nelson Price's live call-in radio program "Hoosier History Live!" at 11:30 a.m. on Saturday, April 4, on WICR-FM 88.7 to discuss the life and times of Hoosier astronaut Gus Grissom.

Here is what the program has to say about my appearance:

We will be back, live with listener call-in and our Hoosier History Trivia Mystery, as we explore the life, legacy, and tragic death of Virgil “Gus” Grissom, the day after what would have been his 83rd birthday--and 50 years after the Mitchell, Ind., native was selected by NASA as one of the original seven American astronauts in 1959.

Nelson will be joined in studio by Grissom expert Ray Boomhower, editor of the award-winning Traces of Indiana and Midwestern History magazine, which is celebrating a milestone of its own. Traces, published by the Indiana Historical Society, is turning 20 years old. During those years, Ray has written a cover story and other articles about Grissom, who became the first person to travel in space twice when he orbited the Earth in 1965. For that mission, Grissom was in a Gemini spacecraft, a chapter that Ray says often is a “lost” part of NASA history because it came between the excitement surrounding the first men in space (those were the Mercury missions, which also involved Grissom) and the moon landings.

Sadly, the Hoosier astronaut wasn’t involved in the latter because Grissom was killed in the explosive fire of his Apollo spacecraft during what was supposed to be a routine test at Cape Kennedy in 1967. A Purdue grad who had been an Air Force fighter pilot during the Korean War, Gus Grissom was just 40 years old.

Fun fact: Still widely remembered as a hero in his home state, Grissom was selected as one of the “10 Greatest Hoosiers of the 20th Century” in a reader participation project by the Indianapolis Star, which Nelson oversaw at the end of the millennium when he was a feature writer/columnist at the newspaper. (Others on the list included Eli Lilly, James Whitcomb Riley, Cole Porter, Madam Walker, Ernie Pyle, and Hoagy Carmichael.)"
Posted by Ray Boomhower at 7:07 AM No comments: