I was interviewed this morning by Matt Jolley for Warbird Radio about my book Fighter Pilot: The World War II Career of Alex Vraciu. You can listen to a podcast of my interview.

Warbird Radio is the first station devoted to military aviation. According to the station, "It’s our goal to preserve the stories and history of the brave men and women who flew these airplanes . . . and still do. Across the globe warbird enthusiasts are tirelessly working to save examples of these historic airplanes; however, the survival of the stories from those who flew them are not guaranteed. That’s where Warbird Radio steps in."
Posted by Ray Boomhower at 1:56 PM No comments: 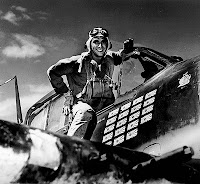 I will be signing copies of my new book Fighter Pilot: The World War II Career of Alex Vraciu from 1 p.m. to 3 p.m. on Saturday, May 22, at Mudsock Books & Curiosity Shoppe, 11631 Fishers Station Drive, in Fishers, Indiana.

A graduate of DePauw University, Vraciu learned to fly during his college years through a government program and joined the navy prior to the Japanese attack on Pearl Harbor. Possessed with keen eyesight, quick reflexes, excellent shooting instincts and a knack for finding his opponent’s weak spot, Vraciu became skilled in the deadly game of destroying the enemy in the skies over the Pacific Ocean.

For a period of four months in 1944, Vraciu stood as the leading ace in the U.S. Navy, shooting down 19 enemy airplanes in the air and an additional 21 on the ground as well as sinking a large Japanese merchant ship. One particularly shining moment came in the Mariana Islands on June 19, 1944, when Vraciu pounced on the Japanese and shot down six dive-bombers in just eight minutes while protecting the U.S. fleet.