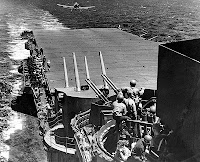 I will be discussing the life of Hoosier ace Alex Vraciu at 1:30 p.m. Thursday, June 17, in the auditorium at the New Castle-Henry County Public Library, 376 S. 15th St., New Castle, Indiana. The program is free and open to the public. After the talk, I will be selling and autographing copies of my book Fighter Pilot: The World War II Career of Alex Vraciu.

The talk on Vraciu, the East Chicago/Indiana Harbor native who shot down nineteen Japanese planes while flying Hellcat fighters in the Pacific during World War II, comes just two days before the pilot's greatest mission. On June 19, 1944, during the Battle of the Philippine Sea (also called by pilots as "The Great Marianas Turkey Shoot"), Vraciu, flying a Hellcat with a malfunctioning engine, shot down six Japanese Judy dive bombers in just eight minutes.

I will be at the Hancock Public Library, 900 W. McKenzie Road, Greenfield, Indiana, at 2 p.m. Friday to sign copies of my book Fighter Pilot: The World War II Career of Alex Vraciu.

Joining me at the book signing with be Major Tibor Bierbaum, author of Our Walk with God: A Love Story of God and Country, and Richard K. Curtis, author of Dumb but Lucky: Confessions of a P-51 Fighter Pilot in WWII.

I will be at the Irvington Branch Library, 5625 E. Washington Street, Indianapolis, for a discussion of my book Robert F. Kennedy and the 1968 Indiana Primary. The discussion begins at 1:30 p.m. Copies of the book will be available for sale and I will, as always, be glad to autograph each copy sold, no charge.
Posted by Ray Boomhower at 7:43 AM No comments: