The Hoosier Character and the Bicentennial

As the buyer for the L. S. Ayres and Company’s book department since 1932, Ben H. Riker, an author himself and president of the Indianapolis Literary Club, held considerable power in deciding what volumes were available for sale to central Indiana readers. After all, the department, located on the downtown store’s street level, enjoyed a reputation as the leading bookstore in the city. Recognizing his influence, the Knopf publishing house in the spring of 1947 sent Riker a manuscript about Indiana for his comment and possible approval. What the firm received in return, however, must have thrown cold water on any hopes by Knopf that the book, written by John Bartlow Martin, a freelance writer and a former reporter for the Indianapolis Times, might receive a warm welcome in the Hoosier State.

Riker wrote to Alfred A. Knopf, the firm’s founder, that the book’s author had “allowed his own political, social, and economic prejudices to color what ought to be an objective piece of reporting with unbiased interpretation. It is interesting enough, but it does not do what it purports to do—or at least what I was expecting it to do.” In an ominous note for any publisher, Riker indicated that most literate Hoosiers, at least the ones who buy books, would not accept the book “as a true picture of Indiana, and a good many of them, I am afraid, will object to the constant damning by innuendo of the conservative elements in the State, which are pretty large and may even be in the majority.” 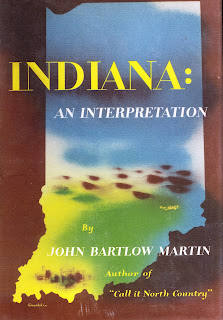 Published in the fall of 1947, Martin’s Indiana: An Interpretation failed to win approval from local critics, who seemed put off by the author’s attempt to examine the idea of Indiana and Hoosiers held by the rest of the nation; a conception, a good deal of which, Martin argued, was a myth of “Indiana as a pleasant, rather rural place inhabited by people who are confident, prosperous, neighborly, easygoing, tolerant, shrewd.” Henry Butler, writing in the Times, offered an accurate assessment of the view many people in the state had of the book when he noted that true believers seldom liked to have their “articles of faith described as myth. And though the Indiana myth is no more fantastic than many phases of the greater American myth, of which it is a part, such a description of Hoosierism may strike some as offensive.”

Martin viewed the 1880s and 1890s as the state’s golden age, when Hoosiers were “confident of the future.” After the 1900s, he said, the state had suffered from a “hardening of the arteries” and had lost its way. Between World War I and World War II the magic and wonder of Indiana’s past—James Whitcomb Riley’s poetry and Elwood Haynes’s inventiveness, for example—had disappeared from the scene to be replaced by robed figures from the Ku Klux Klan. “A suspicion had arisen that bigotry, ignorance, and hysteria were as much a part of the Hoosier character as were conservatism and steadfastness and common sense,” Martin wrote. “One of Indiana’s chief exports had long been ideas, but so many of these had turned out to be wrong-headed, wicked, or useless.” Not surprisingly, as he noted in his memoirs, the book “sold poorly.”

In spite of these setbacks, Martin’s book has survived to become a modern Indiana classic. It should hold a place of honor on the bookshelf of any historian of Indiana and the Midwest as a volume that, as Martin noted, introduced to its readers the “down-to-earth hard-to-beat Hoosier, a shrewd salesman at heart” who emerged during the twentieth century. American historian and political insider Arthur M. Schlesinger Jr., a Martin friend and fellow speechwriter for Democratic presidential candidate Adlai Stevenson, considered Indiana: An Interpretation to be “the best book on Indiana,” and Indiana University Press republished the book in 1992 and recently released a bicentennial edition.

Was Martin correct in the assessment of the Hoosier State he outlined in his book? Did he speak accurately when he warned U.S. Senator Robert F. Kennedy during his run for the Indiana Democratic presidential primary in 1968 that Hoosiers were “phlegmatic, skeptical, hard to move, with a ‘show-me’ attitude”? Readers then and now may disagree with Martin’s conclusions, but at least he had the nerve to delve into the question of what it means to be a Hoosier—the character of people in the state—rather than another tired rehash of the word’s etymology.

Occasions such as centennials and bicentennials are certainly opportune times to examine such questions.  James Woodburn, Indiana University professor of history, knew this. In a 1912 talk before the Indianapolis Literary Club, he looked to the approaching centennial celebration, advising that any attempt to pay tribute to the state should be done “without cultivating or encouraging the spirit of boastful jingoism. . . . If Indiana has made meritorious attainments, let them be set forth in due modesty and without pretense. They will speak for themselves.” What, I wonder, will be the “meritorious attainments” to be held up as examples in 2116?

Posted by Ray Boomhower at 8:56 AM No comments:

Mr. Martin and Me 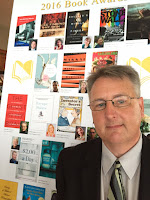 On Tuesday, May 10, I attended with my wife, Megan, the 60th annual awards banquet of the Society of Midland Authors, a group founded in 1915 that includes published authors from twelve states: Indiana, Illinois, Iowa, Michigan, Kansas, Minnesota, Missouri, Nebraska, North Dakota, South Dakota, Ohio,  and Wisconsin. I was there to accept the top prize in the biography/memoir category for my book John Bartlow Martin: A Voice for the Underdog.

It has been quite a spring for my biography of Martin. In addition to the Midland Authors award, the book has been honored with a silver medal in the biography category of the 2016 Independent Publisher Book Awards, received first place in the nonfiction book category for the Indiana Professional Chapter of the Society of Professional Journalists' annual Best of Indiana Journalism Awards, and is a finalist in the biography category of Foreword Reviews' annual INDIEFAB Book of the Year Awards. Not bad for a book that has yet to have any reviews on its Amazon page. And not too shabby considering that when Martin donated his papers to the Library of Congress in Washington, D.C., he cavalierly said to the staff there that probably nobody would ever write a biography about him. Wrong, Mr. Martin, very wrong. 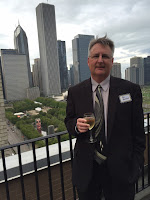 The event was held at the impressive Cliff Dwellers Club in Chicago on an evening where those in attendance could see the fog sneaking along the shores of Lake Michigan from the club's perch on the 22nd floor. Chicago was an appropriate site for honoring Martin, as it was a city that played such a key role in his life as one of America's great freelance writers. Although he grew up in Indianapolis, Martin realized that "Chicago was where things happened. The horizons in Indiana seemed suffocatingly close, the ceiling in Chicago unlimited. And as fast as I could I went." It was where he got his start, writing stories for true-crime magazines, and even penning an advice to the lovelorn column--quite a trick for someone who's first marriage ended in divorce.

Martin was also a member of the Society of Midland Authors and has his own writing honored by the group. In 1967, his book about his days as U.S. ambassador to the Dominican Republic, Overtaken by Events, won the Patron Saints Award, and in 1978 his Adlai Stevenson and the World won for biography.


Posted by Ray Boomhower at 1:13 PM No comments: