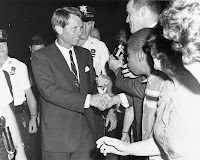 The Indiana University Press Blog features an interview with me about my book Robert F. Kennedy and the 1968 Indiana Primary.

The interview includes a frequent question I receive when talking about the book, namely, what would an RFK administration would have been like if he had lived and won the 1968 general election against Richard Nixon? I always point out that Kennedy faced an uphill battle to win the Democratic nomination that year from Vice President Hubert Humphrey. A different perspective is offered by Mitchell J. Freedman, author of the book A Disturbance of Fate, which is an alternative history where Kennedy narrowly misses being assassinated by Sirhan Sirhan and goes on to win the 1968 election.

In addition to the IU Press Blog interview, I will be speaking about my RFK book at 7 p.m. on Monday, August 25, at the Hancock County Public Library, 900 W McKenzie Road, Greenfield, Indiana. The program is free and open to the public. For more information, call the library at (317) 462-5141.
Posted by Ray Boomhower at 6:39 AM No comments: 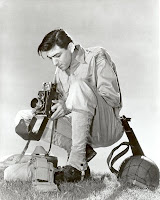 On February 19, 1944, a young photographer from Gary, Indiana, John A. Bushemi, landed with American troops on Eniwetok in the Pacific Theater. Bushemi was there covering the invasion for Yank magazine. Shrapnel from Japanese shells hit and mortally wounded the photographer. As navy surgeons frantically attempted to save Bushemi’s life, the photographer gave his epitaph, telling his friend, “Be sure to get those pictures back to the office.”

At 2 p.m. on Saturday, August 2, I will be at the Lake County Public Library, 1919 West 81st Avenue, Merrillville, Indiana, to talk about Bushemi's life and work and to sign copies of my book "One Shot": The World War II Photography of John A. Bushemi.

“One Shot” features Bushemi’s work, from his early days photographing soldiers training at the Field Artillery Replacement Center at Fort Bragg in North Carolina to his frontline assignments among the grizzled American forces who engaged in the bitter fighting against the Japanese. Assigned to Yank, the weekly magazine written by and for enlisted men, Bushemi specialized in “photography from a rifle’s length vantage point,” according to his colleague Merle Miller.

In honor of the community of Charlestown, Indiana's bicentennial, I will be one of several Hoosier authors signing copies of my books at an Indiana Author booth sponsored by Cardinal Publishers Group. I will be signing copies of some of my most recent books, including Robert F. Kennedy and the 1968 Indiana Primary, from 3:30 p.m. to 5 p.m. on Saturday, June 28, at Charlestown Greenway Park.

Established in 1808, Charlestown served as the county seat of Clark County from 1811 to 1878, before the seat was moved to Jeffersonville.

The schedule of events for the Charlestown celebration includes arts and crafts booths, food vendors, a 5K road race, a parade and float contest, a pioneer village display, and a number of performances by musical groups.
Posted by Ray Boomhower at 9:56 AM No comments:

The fortieth anniversary of Robert Kennedy's death has prompted numerous articles in the media, including an interview with me in my old college newspaper, the Indiana Daily Student. I also was interviewed by Ralph Hipp of WIBW television in Topeka, Kansas, about RFK's legacy.

Also of interest is David Greenberg's assessment on Slate of how Kennedy's death, and Eugene McCarthy's reaction to the loss of his bitter rival, crippled the Democractic Party in the 1968 general election. Greenberg notes the following: "Kennedy's death, of course, did not leave McCarthy alone in the race. All along, many party regulars had preferred Vice President Hubert Humphrey, who announced his candidacy in April but sat out the primaries, instead building his delegate base in states without primaries—which back then constituted a majority."

It's a point I always try to bring up when I'm asked by journalists what would an RFK presidency have been like? Even Kennedy's own advisers believed that RFK had only a 50-50 chance of capturing the nomination from Humphrey at the August 1968 convention in Chicago.

Talking privately with Richard Goodwin after squeaking by McCarthy in the California primary, Kennedy said while he and McCarthy were battling one another, Humphrey had been picking up delegate after delegate around the country. Kennedy did not want to have to spend his time the next few weeks campaigning on every street corner in New York in hopes of winning the primary there. “I’ve got to spend that time going to the states, talking to delegates before it’s too late,” Kennedy stressed to Goodwin. “My only chance is to chase Hubert’s ass all over the country. Maybe he’ll fold.”
Posted by Ray Boomhower at 10:02 AM No comments: