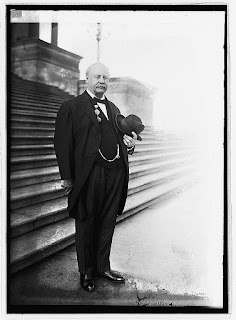 ’s centennial governor, Samuel M. Ralston worked tirelessly to ensure the state commemorated its one hundredth anniversary of admission to the as the nineteenth state in 1916. Backed by the efforts of the Indiana Historical Commission and the work of thousands of volunteers, the centennial observance saw the establishment of state parks, the beginnings of an improved road system, the creation of permanent memorials in numerous communities, the publication of historical volumes, and an overall awakening of interest in the history of the Hoosier State’s heritage.
His role in the successful centennial celebration overshadowed Ralston’s solid reform achievements as the state’s twenty-seventh governor. Although the Lebanon, Indiana, Democrat, a close friend and ally of party boss Thomas Taggart, believed that the citizens of the state were “conservatively progressive,” Ralston championed such measures as the creation of a public service commission to regulate utilities, a vocational education act, a child labor law, an inheritance tax, a tenement housing act, a statewide primary system, a state farm for short-term offenders, and workmen’s compensation. His administration also retired ’s debt.

A solid, affable man known from an early age as an outstanding orator, Ralston earned the affection of Hoosier voters, who elected him to the U.S. Senate over Republican challenger Albert Beveridge in 1922. Thanks to the efforts of Taggart, Ralston came close to capturing the presidential nomination at the Democratic National Convention of 1924, but pulled out of the race at the last minute citing ill health.

Born on December 1, 1857, near New Cumberland, Tuscarawas County, Ohio, Ralston was raised by Sarah (Scott) and John Ralston, whose grandfather fought in the Revolutionary War. In 1865, the Ralston family moved to a four-hundred-acre farm near Spencer in Owen County, Indiana. While working on his father’s farm, Samuel Ralston became intrigued with pursuing a career in law after attending a trial before a justice of the peace. The financial panic that swept the country in 1873 caused the Ralstons to lose their farm and forced a move to Fontanet in , where John Ralston leased land on which he mined coal. Working on farms during the summer, Samuel Ralston received his education during the winter, becoming a veracious reader.

Teaching school to earn money for his further education, Ralston attended the Northern Indiana Normal School in Valparaiso and also the Central Normal College in Danville, where he became involved in the Young Men’s Democratic Club. In 1881 Ralston married Mary Josephine Backous of , but she died a year later. Ralston received his degree from in 1884 and began the study of law in the offices of J. C. Robinson and I. H. Fowler in Spencer. During his study, Ralston, to save money, slept on a sofa in the law office, finally winning admittance to the bar in January 1886. Looking to open his own practice, Ralston first considered , but hearing about an opportunity for a young Democrat lawyer, he moved to , the county seat of , where he formed a partnership with John A. Abbott.

In addition to his law practice, Ralston worked to support the Indiana Democratic Party, giving speeches on its behalf throughout the state and earning the respect and friendship of party leaders such as Taggart. Ralston’s success with the party faithful did not translate into success for himself with voters as in 1888 he lost a race to represent Clinton, Montgomery, and Boone Counties as state senator. He subsequently lost two races for the secretary of state office in 1896 and 1898. Ralston had more success with his personal life, marrying Jennie Craven of , whom he had met while a student at Central Indiana Normal, on . The couple had three children; a daughter, Ruth, and two sons, Emmet and Julian.

With his continuing service to the party, and his friendship with Taggart, Ralston seemed assured of gaining the top spot on the ticket—the gubernatorial nomination—when the Democrats gathered for their convention held March 25, 1908 at Tomlinson Hall in Indianapolis. At the convention, forces loyal to Taggart lined up in support of his candidate, Ralston. Meanwhile, those opposing Taggart’s control over the party touted the candidacy of L. Ert Slack. With the convention deadlocked after four ballots, Ralston, pressed by his patron Taggart, announced his withdrawal from the race. With Ralston’s withdrawal, voters quickly turned to a compromise candidate, Thomas Marshall, and he received his party’s nomination on the subsequent ballot. would go on to defeat GOP candidate James Watson by approximately fifteen thousand votes.

After his defeat, Ralston returned to his law practice in Lebanon, where he also served as president of the school board from 1908 to 1911. In 1912, following a successful term in office by , Ralston faced no opposition and received the Democratic nomination for governor at the party’s convention on March 17 at Tomlinson Hall. The general election saw Ralston helped by a split in the Republican Party. The deep division between incumbent President William Howard Taft and Theodore Roosevelt had prompted to bolt the party and establish the Progressive Party. A similar split occurred in , with the Progressives nominating Beveridge for governor while the Republicans turned to former governor Winfiled T. Durbin. In the general election, Ralston received the largest plurality ever given a governor at that time and easily defeated Beveridge, who finished ahead of Durbin. Democrats also won control of both houses of the state legislature.

Taking office under a banner of “economy and reform,” Ralston reminded the Indiana General Assembly that there existed among voters a growing wish for the “supremacy of the people over combinations of all kinds” and if the party in power failed to answer the demand it would “be repudiated by the people at their first opportunity.” The legislature responded by establishing a public utilities commission to oversee telephone, gas, water, power, streetcar, and interurban companies. In addition, the legislature agreed with the governor’s call for an overhaul of the state constitution, approving a series of amendments offered by State Senator Evan Stotsenburg, a Democrat from . The amendments incorporated a number of changes sought during ’s term as governor. In addition, legislators passed along to voters a proposal for calling a constitutional convention (Hoosier voters overwhelmingly rejected such a convention during the 1914 election).

The most contentious issue facing Ralston’s administration came in October 1913, when the Amalgamated Association of Street and Electric Railway Employees, foiled in its attempt to unionize approximately eight hundred workers at the Indianapolis Traction and Terminal Company, called upon motormen and conductors at the firm to strike to win union recognition along with higher wages and better working conditions. The company responded by firing striking workers and bringing in strikebreakers in order to keep its operation running. Responding to growing violence and the inability of the local authorities to maintain order, Ralston called out the Indiana National Guard.

On the afternoon of November 6, thousands of workers gathered on the south lawn of the Statehouse to protest the governor’s action. Ralston left his office and spoke to the crowd, expressing sympathy for “the men and women who toil,” but also called for an end to the violence and asked for the union’s aid in preventing any more damage or injuries. He then successfully brought the Traction firm and workers together to settle the strike.

Although Indiana voters in 1914 had rejected a call to celebrate the state’s centennial by appropriating two million dollars for the construction of a memorial building to house the state library and other historical agencies, Ralston requested, and the legislature approved, a $25,000 appropriation and the creation of a nine-member Indiana Historical Commission charged with promoting a centennial celebration. The IHC sponsored historical pageants in communities throughout the state and, thanks to the efforts of conservationist Richard Lieber and others, developed ’s first state parks, McCormick’s Creek and Turkey Run. The emphasis on the nineteenth state’s past also sparked a general interest in Indiana , with local historical societies formed or reactivated and the Indiana Historical Society seeing an influx of new members.

Leaving the governor’s office with the state having a surplus of approximately four million dollars, Ralston returned to the practice of law, teaming with Indianapolis attorney Frederick Van Nuys. In 1922, he received the Democratic nomination for the U.S. Senate, going on to defeat a familiar opponent in Republican candidate Beveridge by approximately fifty thousand votes. As a senator, Ralston supported the paying of the bonus for World War I veterans and worked to reduce taxes.

At the July 1924 Democratic National Convention in New York’s Madison Square Garden, Ralston, with Taggart’s backing, came tantalizingly close to capturing the presidential nomination that ultimately went to New York lawyer and West Virginia native John W. Davis. Due to ill health, Ralston withdrew his name from consideration for the nomination. Ralston died at his estate, Hoosier Home, located northwest of on . He was buried at the .

Posted by Ray Boomhower at 9:44 AM No comments: