The Correspondent and the Flag

On February 19, 1945, Time correspondent Robert L. Sherrod, as he had on previous occasions, accompanied members of the U.S. Marine Corps as they fought to take a heavily defended enemy outpost in the Pacific. Sherrod set foot on Iwo Jima’s coarse, volcanic-ash beach late on the afternoon of the first day of combat with fifteen officers and men of the Twenty-Fourth Marine Regiment, Fourth Marine Division. The correspondent spent two days on the island, where, among the American fighting men, as Admiral Chester Nimitiz said, “uncommon valor was a common virtue,” before returning to his transport to write his stories of a “very hot beachhead” for Operation Detachment. 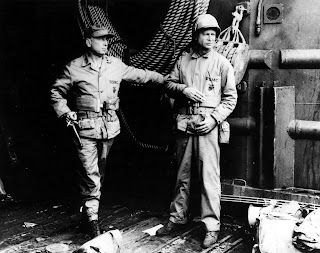 On February 23, after spending two days on the USS Bayfield, Sherrod was ready, “and moderately willing,” to return to Iwo Jima. For his trip, he hitched a ride with Major General Clifton B. Cates, Fourth Marine Division commander, on a Landing Ship, Medium (LSM), as the surf had turned too rough for Higgins boats to navigate safely ashore. “Weather today again stormy, cold, prohibits much landing of supplies. . . . Choppy, mean water,” Sherrod wrote in the notebook he always carried with him into battle.

Soon after the craft was under way, Sherrod heard someone yell, “Look, they’ve got the flag up on Mount Suribachi!” Sherrod and Cates looked up and saw the Stars and Stripes atop the extinct volcano, which the correspondent described as resembling “an inverted, slightly melted” ice-cream scoop. “Tears welled in the eyes of several Marines as they watched the little flag fluttering in the breeze,” Sherrod said. The correspondent jotted down in the notebook: “Approaching control boat. Can see troops standing on Suribachi and flag flying.” Sherrod remembered seeing General Cates look at the flag and commenting, “I’m glad—Keller Rockey [the Fifth Marine Division commander] is a fine fellow.” Sherrod noted that Cates made his comment as though he believed the capture of Suribachi signaled the end of the battle, and he had missed it.

Cates was mistaken—there were still plenty of Japanese left on the island, and the 70,000 marines who took part in the fighting endured additional suffering before organized resistance ended on March 25. “Iwo Jima took a long time; it was to seem like centuries before it was over,” said Sherrod. Among those who gave their lives on the island was Sergeant Ernest Thomas, the leader of a detachment from Third Platoon, Company E, Twenty-Eighth Marines that had fought its way up the steep slopes of Suribachi to raise the first flag, a twenty-eight by fifty-four-inch banner brought to Iwo Jima from the attack transport USS Missoula and attached to a Japanese pipe found on the mountain’s summit. A marine combat cameraman, Sergeant Louis Lowery, had joined the patrol and was able to take photographs of the stirring scene. “It was a dramatic moment. It seemed that we could do anything if we could capture that vertical monstrosity at the south end of Iwo,” said Sherrod. 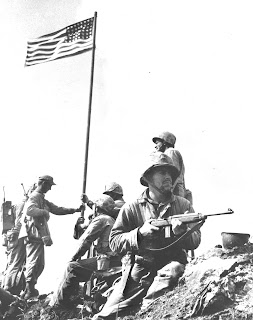 The first flag to fly over the mountain had been carried to the top by a forty-man combat patrol under the command of First Lieutenant Harold G. Schrier, who had been ordered to seize and occupy Suribachi’s crest by Colonel Chandler W. Johnson. When the patrol reached near the top, it engaged in a firefight with the enemy. While the skirmish still raged, some of the marines found a Japanese iron pipe to which they could secure the American flag, and picked the highest spot on which to raise it. “We found a water pipe, tied the flag to it and put it up,” recalled Corporal Charles W. Lindberg. “Then all hell broke loose below. Troops cheered, ships blew horns and whistles, and some men openly wept. It was a sight to behold . . . something a man doesn’t forget.” On the beach below, General Holland Smith saw the flag flying atop Suribachi, and later called it one of the “proud moments of my life.” Standing next to Smith was Secretary of the Navy James Forrestal, who had accompanied the invasion forces. Forrestal turned to the general and said, “Holland, the raising of that flag on Suribachi means a Marine Corps for the next 500 years.”
Sherrod made it ashore at Iwo Jima at 12:30 p.m. on February 23 and conferred with General Rockey at his command post, joined there by Major General Harry Schmidt. The executive officer of the Twenty-Eighth Marines, Robert H. Williams, briefed the generals about conditions on the island’s southern end, and received congratulations on capturing Suribachi. “It wasn’t so tough,” Williams said, “there wasn’t a great deal of opposition after we got past the guns at the base of the mountain.” As he continued walking toward Suribachi, Sherrod stopped to talk with an officer who lamented the failure to capture any Japanese prisoners. “Before we blow a cave we give them a chance,” noted Colonel Harry Liversedge. “We send an interpreter up to the cave and he tells the Japs they’ll be well treated if they surrender. They never do.”

With several other correspondents, including John Lardner of The New Yorker, who had been with him in Australia earlier in the war, Sherrod intended to climb the 556 feet to the top of Suribachi, but “it was late in the afternoon and the way was steep for old newsmen in their thirties.” Sherrod never made it to the mountain’s summit until a year and a half later, via Jeep, and did not know at the time that the first flag had been replaced by a larger, second flag. “Nearly everyone on the island faced northward, away from Suribachi,” he explained. 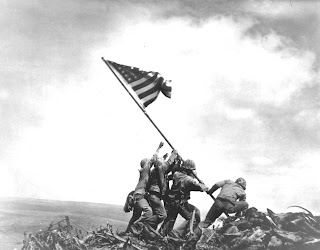 In addition to reporting on the fighting on Iwo Jima, described by General  Smith as “the most savage and costly battle in the history of the Marine Corps,” with every third man who landed either killed or wounded, Sherrod found himself engulfed in another controversy. On this occasion, it involved what is today considered the iconic image of World War II—Associated Press photographer Joe Rosenthal’s shot of a group of six Marines raising the flag atop Suribachi, actually the second flag to be placed on the mountain. A marine colonel had sent one of his men to get a larger flag from one of the ships on the beach to replace the first—a flag large enough, he said, so “that the men at the other end of the island will see it. It will lift their spirits also.” Sherrod supported the marine, Lowery.

The correspondent initially believed that Rosenthal’s image had been posed and Lowery had been cheated of proper credit for his work. Sherrod even cabled Time on March 13 that the planting of the flag “didn’t quite happen that way and the historical picture was a post facto rehearsal.” (Rosenthal always rightfully maintained that his image had not been posed, and even noted that if he had purposely posed the shot, “I would, of course, have ruined it. I’d have picked fewer men. . . . I would also have made them turn their heads so that they could be identified for AP members throughout the country, and nothing like the existing picture would have resulted.”)

Sherrod later noted he “could not have been more wrong” about Rosenthal posing the photograph, and was embarrassed about his error for years to come. Still, he believed that the “implications of Rosenthal’s picture were all wrong.” Iwo Jima had not been a matter of “climbing the parapet and heroically planting the flag there,” said Sherrod. Instead, he reflected after the war, it had been a “tortuous, painful slogging northward on the pork chop-shaped island, which eventually cost us 6,821 killed and 19,217 wounded. Suribachi was a symbol, and it was nice to have our flag up there, but the action—and the horror—was elsewhere.”

The battle for the island seemed “ghastlier in many ways than the others” he had been involved with in the Pacific. Sherrod doubted if any other troops in the world except those of the U.S. Marine Corps could have taken such high casualties and continued organized fighting. “The very violence of Iwo Jima is almost beyond the comprehension of men who saw the others: Tarawa, Saipan, Peleliu,” Sherrod said. “There has never been anything to compare with this one.”