On August 15, 1945, Japanese Emperor Hirohito, in a taped radio message, announced that the war had ended and the government had accepted the surrender terms offered by American President Harry Truman. The end of the bloody fighting in the Pacific theater, however, came too late for a Hoosier who had been documenting with his camera the struggles of his fellow soldiers, Staff Sergeant John A. Bushemi of Gary, Indiana.
More than a year before Japan’s surrender, two battalions of the U.S. Army’s 106th Infantry Regiment, Twenty-Seventh Division, hit the beaches of Eniwetok, an atoll located at the far northwest end of the Marshall Islands in the central Pacific. As the American soldiers crept toward their objectives, they were continually sniped at from the side and rear by Japanese troops cleverly hidden in a series of camouflaged foxholes. 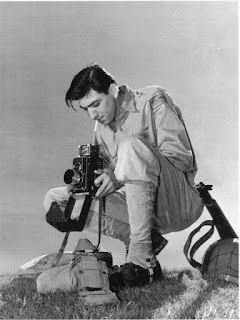 Observing the operation that day were Merle Miller, a correspondent, and Bushemi, a photographer for Yank, the army’s weekly magazine produced by and for enlisted men. As Miller and other combat journalists stopped about seventy-five yards behind the front lines to examine a bullet-riddled chest of books, they became a target for a series of Japanese knee-mortar shells. Shrapnel from the shells hit and mortally wounded Bushemi, who before the war had worked as a photographer for the Gary Post-Tribune. Immediately after being hit, Bushemi’s first concern was not for his wounds, but for his equipment. As Navy surgeons frantically attempted to save the photographer’s life onboard a transport ship, Bushemi, with his last words, said to Miller: “Be sure to get those pictures back to the office.”
Photography as a means of earning a living was a novelty for Bushemi’s family. The family’s patriarch, Pietro, had arrived in the United States from Sicily in early June 1906, and eventually settled in Centerville, Iowa, where he worked in a local coal mine. It was in Centerville where John was born on April 19, 1917. The children numbered nine (six boys and three girls) when in 1925 the family moved to Taylorville, Illinois. Four years later, with the Great Depression tightening its grip on the nation’s economy, including the coal industry, Pietro heard from relatives that there might be jobs available in the steel mills of Gary, Indiana. The entire Bushemi family moved to the Hoosier State in May 1930, settling in Gary’s Glen Park neighborhood, and Pietro found a job in U.S. Steel’s coke plant.
As a teenager growing up during the Great Depression, John did whatever he could to earn money, from boxing in Golden Gloves tournaments to offering haircuts for twenty-five cents from a barber’s chair in the basement of the family’s home. After he quit school during his junior year at Gary’s Lew Wallace High School, Bushemi joined his father and brothers in working at the local steel mills. With the wages from his job he purchased his first camera, a small Univex that he used to take photographs of family members and special occasions. He developed the film in a darkroom located in his mother’s closet. 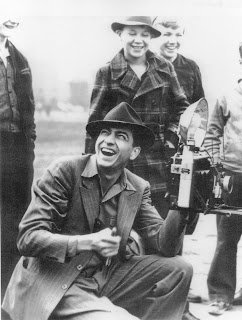 On June 24, 1936, Busehmi left the steel mills for good when the Post-Tribune hired him as an apprentice photographer. Although he covered a variety of community events for the newspaper, he earned his reputation taking sports photographs, where his “perfect timing” captured athletes at their best. He won numerous awards for his sports photography in contests sponsored by the Indiana Associated Press and the Inland Daily Press Association, which included entrants from newspapers published in eighteen states.

Just five months before the American Pacific fleet was attacked by the Japanese at Pearl Harbor on December 7, 1941, Bushemi enlisted in the U.S. Army, the first Post-Tribune staff member to enter military service. After induction at Fort Benjamin Harrison in Indianapolis, Bushemi traveled to the Field Artillery Replacement Center at Fort Bragg in North Carolina for basic training. Before long, however, the army realized that Bushemi’s true skills lay not in firing a 75-mm gun but in photography. Officers assigned him to the base’s public relations office, which was staffed by three privates: Don Bishop, Thomas James Montgomery Mulvehill, and Marion Hargrove, who wrote about the group’s experiences in his best-selling book See Here, Private Hargrove, published in July 1942. 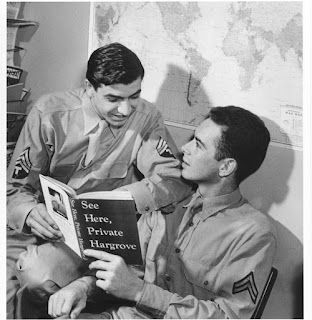 Until Bushemi joined the public relations staff, said Hargrove, the three privates had been used to a leisurely pace. Hargrove admitted that he never did “an honest day’s work in the Army” until he teamed with Bushemi. The first day he came to work for the office Bushemi teamed with Hargrove to cover the annual mile-and-a-quarter obstacle race involving the base’s Fourth Training Regiment. To obtain a picture of the race’s start, Bushemi climbed on top of a large platform. When the race started, Hargrove said, Bushemi jumped from the platform and, fully equipped with camera and equipment, ran down the course to follow the participants. “Got the start,” the photographer shouted to Hargrove. “Now I’ve got to get some obstacles.” Photographing his way through the obstacles, Bushemi kept pace with the racers and missed the finish by a matter of seconds. “Without the weight of his Speed-Graphic,” observed Hargrove, “I think he would have won.”
Hargrove seemed to have the upper hand on his Hoosier rival when he received orders to join the staff of Yank, the newly created army magazine run by enlisted men. The weekly magazine, which opened its headquarters in May 1942 at 205 East Forty-second Street in New York, was under the direction of the Army Information and Education Division of the War Department’s Army Service Forces. Sold to soldiers for five cents a copy, Yank entertained the troops in its early days with such popular features as George Baker’s “Sad Sack” cartoons and pin-ups of Hollywood stars. Learning of his close friend’s imminent departure for Yank, Bushemi, according to Hargrove, “fretted and cracked his knuckles for several days” before sending a scrapbook of his best pictures to Yank’s New York office. Impressed by Bushemi’s photography skills, Yank’s editors invited him to join the staff. 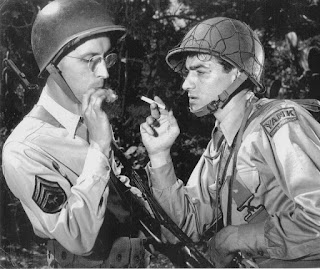 Bushemi worked as a photographer for the magazine’s New York office until November, when he and Miller went to Hawaii to open the magazine’s Pacific bureau. Both Bushemi and Miller were eager to report on the American war against the Japanese, but instead they spent many quiet months in Honolulu covering training stories. The tedium was broken a bit for Bushemi when he received instruction in motion picture filming from Colonel Frank Capra, the famed Hollywood director. Bushemi later shot and edited his own movies, each of which began with the words “A One-Shot Production.”
In the summer of 1943 Bushemi finally had his chance to photograph combat operations in the southwest Pacific, teaming with veteran correspondent Morriss to cover the action on New Georgia, located northwest of Guadalcanal in the Solomon Islands. Hargrove said his friend turned in to Yank “excellent studies of jungle operations and portraits of the bearded infantrymen who had sweated out the battles of the Munda airstrip and Hastings Ridge.” On these trips Bushemi was armed with his Bell and Howell movie camera, a Rolleiflex, and a Speed-Graphic.

In covering the invasion of Kwajalein Atoll (the largest coral atoll in the world) in the Marshall Islands in late January 1944, Bushemi was reunited with Miller. While Miller covered the operation with the army’s veteran Seventh Division at one end of the atoll, Bushemi worked with the Fourth Marine Division at the opposite end. While at Kwajalein, Bushemi suffered a hand injury. After gathering information for an article on army scouts, Miller and Bushemi were returning to their original transport onboard a barge in rough seas when a pulley rope broke loose, sending a davit crashing into Bushemi’s left hand and fracturing a finger in the process. “I tried to urge Johnny to go back to Honolulu, but he hardly listened to me,” Miller said. “He knew another operation was coming up, and he wanted to go along.” 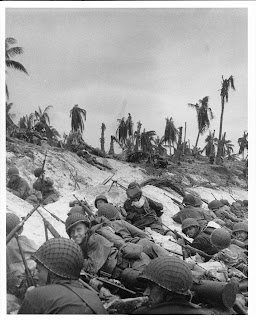 American planners had intended to attack Eniwetok, located about 350 miles northwest of Kwajalein, in May, but the success of the previous operation caused them to launch the assault ahead of schedule. Although he had to operate his camera with one hand because of his injury, Bushemi refused to stay behind, landing on Eniwetok with Miller during the fourth wave of troops. During the landings of the first four waves, Miller reported, there seemed to be no opposition from the Japanese. Minutes later, however, the enemy responded to the attack with rifle fire and knee-mortar shells that fell among the GIs still on the beach. Enemy units hid in foxholes and spider trenches, firing on the Americans from behind as they advanced.
Separated during the fighting, Bushemi and Miller, joined by correspondents from the Chicago Tribune and Chicago Daily News and photographers from other services, left the front for the beach early in the afternoon. Finding shelter behind an American medium tank, the group stopped to compare notes and smoke cigarettes. 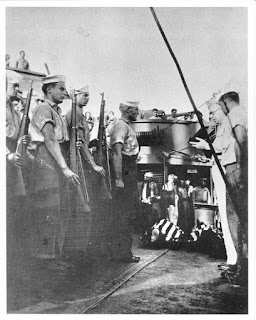 After witnessing a strafing run by Gruman Avenger airplanes, the group had gone to survey the damage when it came under fire. Bushemi received shrapnel wounds in his left cheek, neck, and left leg. Bleeding profusely, Before leaving the island, Bushemi joked with his companions and inquired about others also injured in the shelling. “The navy doctors had to give him ether so they could tie some severed arteries which had caused him such serious blood loss from his neck wound,” said Miller, “and it was after the anesthetic was administered that Johnny passed away—about 5:50 p.m.”

Family and friends held a memorial service for the fallen photographer in Gary on March 3, 1944 (Bushemi’s remains did not make it home for burial at Mount Mercy Cemetery until November 1947). Fellow Gary veteran Sam Catanzarite, copilot of a B-24 bomber who had seen Bushemi in the Pacific and spent leaves with him in Hawaii, expressed no surprise about the photographer’s death. “I had a feeling that Johnny’s number would come up one day,” Catanzarite told Rosenau, “for he was always right up there at the frontline getting his pictures.”

Are you looking for the best online luxury shopping with bitcoin website. Why are you worry about it. We are here for you, yes! you can find here many luxury items for you. Visit now for more details.